Video Alert: We Now Know How Powerful an American Aircraft Carrier Truly Is 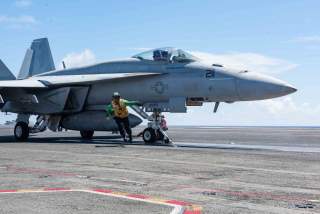 But, as the beautiful video in this post shows, there was a time when the Carrier Air Wings crowded the decks with airplanes of different shapes, sizes and capabilities.

In fact the typical mix of a current CVW is one F/A-18F (two-seat) Super Hornet squadron, and three single-seat F/A-18E Super Hornet squadrons or a mix of F/A-18E Super Hornet and F/A-18C Hornet squadrons and it’s becoming common seeing the Strike Fighters Squadrons (VFA) equipped only with Super Hornets which are replacing the oldest legacy Hornets. Another version of the F/A-18, the EA-18G Growler have replaced the EA-6B in the Electronic Warfare role. The CVW is completed with the E-2 Hawkeye for the Airborne Early Warning (AEW) mission and with the SH/MH-60 Seahawk as Search And Rescue (SAR) and Anti-Submarine Warfare (ASW) platform. The logistic duty of the Carrier Onboard Delivery (COD) is provided by the C-2 Greyhound.

As we can see the today flight deck is nearly all Hornet.

But, as the beautiful video in this post shows, there was a time when the Carrier Air Wings crowded the decks with airplanes of different shapes, sizes and capabilities. Called Air Power at Sea, the clip includes several footage used for the motion picture “The Final Countdown”, during which the aircraft carrier USS Nimitz (CVN-68) travels through time to the day before the 1941 attack on Pearl Harbor.

This video shows the typical composition of a CVW between the end of the 1970s and the early 1980s. In fact the Carrier Air Wing 8 (CVW-8) then embarked onboard the Nimitz consisted of two Fighter Squadrons equipped with the F-14 Tomcat, one medium Attack Squadron which flew with the A-6 Intruder and two light Attack Squadrons that flew the A-7 Corsair II, while a dedicated version of the Intruder, the KA-6D, ensured the aerial refueling. Another A-6 variant, the EA-6B Prowler, was the dedicated electronic attack platform, while the S-3 Viking performed both the ASW and the Sea Control duties. The CVW was completed by the E-2C Hawkeye for the AEW mission and with the SH-3 Sea King for SAR role, whilst another Grumman bird, the C-1 Trader still flanked the C-2 as COD.

As it can be noticed, not only a wide variety of aircraft composed a standard CVW, but the Grumman Aerospace Corporation, the historic airplanes builder for the U.S. Navy, still ruled the deck of the flattops. Today with the F-14 and the A-6 retired and the EA-6B replaced by the Growler, the only Grumman Ironworks product left in the CVWs is the E-2, with the Hawkeye fleet upgrading to the D variant.

Once the CVWs were also more colorful: as you can see in the video in fact, most of the aircraft were painted in beautiful high visibility liveries, even if the F-14 Tomcats from the VF-41 Black Aces already sported the low visibility markings, a steady constant of today Carrier Air Wings airplanes.