This Video Proves Nothing Stops a B-52 Bomber 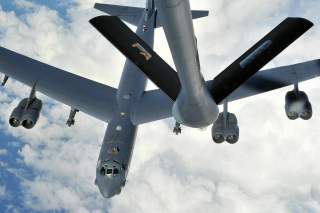 Taken on Apr. 5, 2019 the impressive video in this post shows B-52 Stratofortress strategic bombers fighting heavy crosswinds to takeoff from RAF Fairford.

The footage features 3 BUFFs leaving RAF Fairford for Barksdale Air Force Base (AFB), Louisiana. Six in total have been in the UK along with 400 USAF personnel, conducting many training missions with NATO and allowing aircrews to conduct theater familiarisation and to demonstrate U.S. commitment to allies and partners.

They were met along the way with fueling support from KC-135 Stratotanker based out of RAF Mildenhall, England.