VIDEO: Russia Is Showing Off Its Su-57 Stealth Fighter (With an Interesting New Feature) 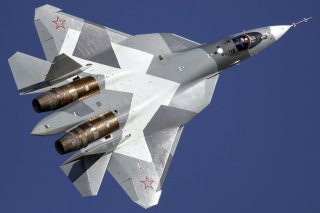 While the Su-57’s paint scheme is unlikely to make a significant operational difference, it serves another purpose: It looks good.

Russia has aggressively marketed the development of its flagship, fifth-generation stealth fighter over the past few months. Every new sighting of the Su-57 introduces features and changes that, when considered in their totality, give observers a sense of where the much-anticipated jet fighter’s production is headed.

Recently released video footage of two Su-57’s in Russia confirms earlier reports that the jet fighter is using a new, pixelated white/dark grey camouflage scheme. One of the showcased aircraft is darker than the other, suggesting that the Russian Air Force is still experimenting with the final tone.

Russian state news asserts that the new pixelated camouflage provides a “low optical signature,” but what exactly does this mean?

There are several ways in which camouflage can affect aerial performance. Its traditional purpose is to blend into the background, with lighter sky above and darker terrain colors below.

Background camouflage is most effective when precisely coordinated with the operating theater, such as using shades of brown or leopard patterns in the desert. While paint camouflage has also been used to distinguish friend from foe, there are now much more sophisticated, signal-based ways of doing this in modern aerial warfare.

The Su-57’s light accents are somewhat reminiscent of background camouflage, but the chassis’ combination of light tones with darker pixelation presents a jarring contrast with virtually any kind of terrain. Another factor is at play: the Su-57’s dark grey strip with pixelated edges is a type of digital multi-scale camouflage, which can serve a wide range of tactical purposes.

On a jet fighter, a conspicuous dark inner coat and sky-colored outer coat can create the illusion of a smaller target. The aggressive pixelation separating these two colors makes it harder to determine the shape and size of the Su-57 from a distance, supposedly obstructing target acquisition in dogfights.

But whatever the merits of aerial digital camouflage as used throughout the 20th century, it is now rapidly being rendered obsolete. While the human eye may be fooled by irregular patterns at large distances, modern air-to-air and surface-to-air systems incorporate automated target acquisition technology like active electronically scanned array (AESA) radars and infrared homing weapons. Conflicts involving strategic fighters such as the Su-57 are likely to be resolved by automated systems long before paint camouflage can become tactically relevant.

While the Su-57’s paint scheme is unlikely to make a significant operational difference, it serves another purpose: It looks good, and branding is a considerable part of Russia’s effort to reassure the public and investors on the heels of financial and technical obstacles faced by the Su-57 over the past few years.

India’s recent withdrawal from a joint Su-57 venture was a blow to the financial stability of the project, especially given the jet fighter’s immense cost of production. The Kremlin hopes to re-sell New Delhi on the Su-57 by not only showcasing the technical progress made in its development, but by presenting it as an overall compelling product from inside and out.

Other recent improvements include a revised seat ejection mechanism, and a new anti gravity suit designed to enable pilots to take full advantage of the Su-57’s maneuverability.

The Su-57’s development is the subject of a high profile, multi-part documentary airing on the official channel of the Russian Ministry of Defense, Zvezda. The finer points of aircraft engineering can be difficult to convey, while a flashy paint scheme presents an immediate source of product recognition.