This Video Shows How China Would Invade and Crush Hong Kong 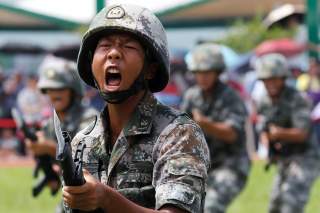 The continued protests in Hong Kong have led China’s People’s Liberation Army (PLA) to release a propaganda video and a statement, showcasing the capabilities of the PLA’s selective Hong Kong garrison. Ostensibly, the video is to showcase the Hong Kong (HK) garrison’s ability to protect the sovereignty of China.

However, the video could be seen as a threat to protestors, as the PLA shows off intense urban combat drills as well as anti-riot tactics in their video. The video can also be seen as a warning to possible foreign powers thinking about intervention, as anti-ship capabilities are also demonstrated in the video.

At the start of the video, a PLA helicopter inserts what appears to be a special forces squad into an urban combat training area. While most soldiers in this squad use PLA standard-issue QBZ-95 rifles, the weapon manipulation techniques appear to be modern, with soldiers switching shoulders in the helmet cam portion and utilizing Western “C-clamp” grip techniques. A “cornershot” type weapon is also shown, a pistol mounted in a turning mount that can be used to shoot around corners. Paintball training markers are also shown, though clips with these training rifles are interspersed with clips of actual firearms. Regardless, the leading clip of urban combat is probably meant to demonstrate the modernity of the HK garrison’s techniques, training and equipment.

Following the urban combat portion, the video switches to a Chinese maritime boarding team clearing a ship. Interestingly, this team is equipped with suppressed submachine guns in addition to standard rifles.

The video then cuts to a shot of a Chinese sniper loading an anti-materiel rifle and taking a shot. The distance to the target is shown to be 600 meters. Then the target, a civilian car, is shown taking incredible damage from the impact of the sniper rifle round. The round presumably an explosive .50 caliber round similar to the Mk 211 Raufoss as an explosive flash is visible in the video. While the clip is presumably meant to simply show the skill and power of Chinese snipers, the use of a civilian car as a target might be an intimidation move meant to discourage more affluent HK citizens from taking part in protests.

The next section is perhaps meant to be the most discouraging to protestors. The HK garrison shows off their riot equipment: megaphones, phalanxes of soldiers with riot shields and armored personnel carriers equipped with water cannons. Perhaps to avoid comparisons to Tiananmen Square, the APCs shown clearing the streets are wheeled, not tracked, though they are fitted with plow-style attachments.

The video finishes off the military section with a few more clips with conventional mechanized infantry exercises (in a non-urban area) and some clips of the People’s Liberation Army Navy firing naval guns and launching missiles. However, one clip shows a small boat being destroyed by rocket pods on a light attack helicopter, perhaps suggesting that there will be no escape by sea for those who defy the government.

At the end of the video, a series of interviews with presumably local citizens is shown, who express admiration at the power and discipline of the PLA and express the opinion that HK is a part of China. Overall, the HK garrison video a pretty blatant piece of propaganda that shows off the “cutting edge” capabilities of the PLA. The PLA appears to have taken significant cues from the West in their urban combat and riot suppression techniques. They are perhaps attempting (and failing) to show that they are less heavy-handed than the PLA of the past.