This Video Shows Why Russia's Navy Can Sink Your 'Battleship' 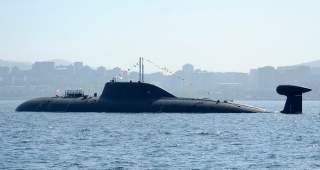 Russia’s Pacific Fleet is carrying on with what is shaping up to be its largest naval exercise in the Sea of Japan since the start of 2019.

Two Russian MiG-31 fighters and an A-50 (AEW&C) plane ran their own parallel mission in the meantime, tracking the two moskit missiles to practice interception routines; essentially, two exercises in one.

The ramjet-powered, supersonic P-270 Moskit continues to serve as one of Russia’s most prolific anti-ship cruise missiles, spawning coastal, mini, and even air-launched variants over the past several decades. Capable of traveling at Mach 2.2 while maintaining low altitude, the kinetic impact of these missiles alone would be enough to tear through destroyer-sized surface ships lacking the relevant frontal defenses.

As one of only two Soviet-era “Sovremenny” class destroyers to remain in service, Bystryy occupies an increasingly niche role within a Russian navy that is slowly transforming into a lean, submarine-based rapid response force. In any case, the Sovremenny line has been aggressively phased out in favor of the newer and more heavily-armed (especially in anti-submarine warfare department) Udaloy I class.

This latest wave of drills comes on the heels of bombing and interception exercises held by the Pacific Fleet in the Sea of Japan earlier this week: "During the drills, a pair of Tu-22M3 missile-carrying bombers simulated delivering a tactical strike by Kh-22 cruise missiles against a grouping of a notional enemy’s surface ships and employed passive jamming measures. In turn, two MiG-31BM fighter jets of the Pacific Fleet scrambled from the aerodrome in the outskirts of Vladivostok and successfully intercepted the bombers," reported the Pacific Fleet’s press office. It is unknown at the time of writing if any further Pacific Fleet drills are planned in the region.

While not nearly the powder keg that the Baltic Sea and its airspace have become since the Crimean annexation of 2014, even as geographically insulated a region as the Sea of Japan is no stranger to recent military tensions. In the summer of 2018, Russia held its largest-ever military exercise across the Bering, Okhotsk, and Japan seas in tandem with China, dubbed Vostok 2018. In response to Vostok 2018 and the subsequent Kerch Strait incident, the U.S. Navy sent guided-missile destroyer USS McCampbell on a freedom of navigation operation in the Sea of Japan to “challenge Russia's excessive maritime claims.” The Japanese Air Self-Defense Force (JASDF) was scrambled several times over the prior months to intercept Russian and Chinese military aircraft flying over the Japan Sea.

The Pacific Fleet is conducting these latest exercises under the shadow of a breakdown in recent Russian-Japanese negotiations to resolve the status of the disputed Kuril Islands.