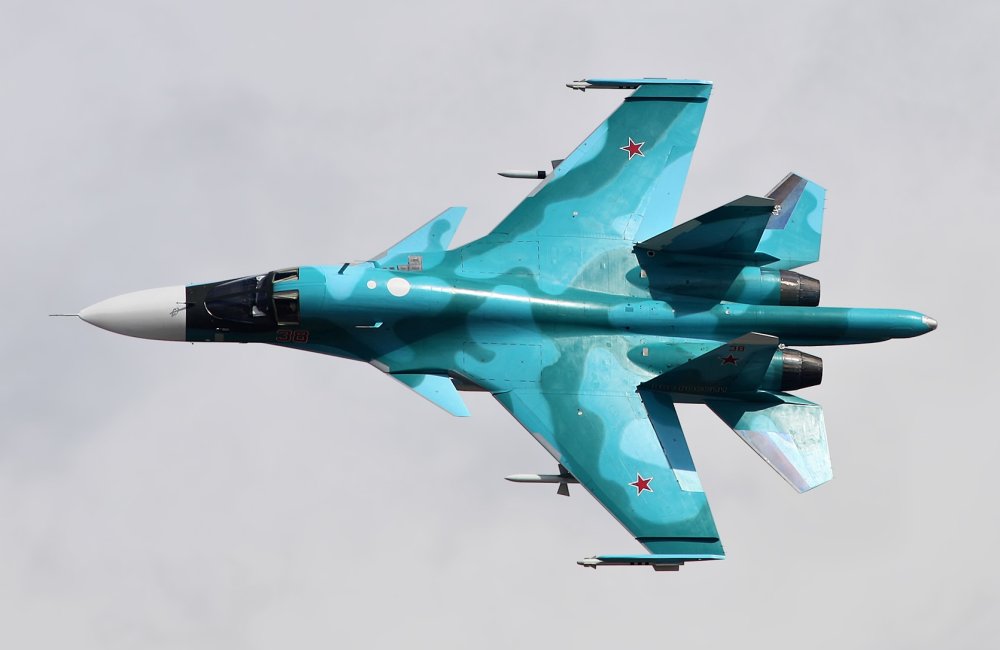 Russia's Su-34 fighter-bomber aircraft is again in the headlines after successfully completing an aerial refueling exercise under “extreme” conditions.

Zvezda, the official television channel of Russia's Defense Ministry, has published video footage of the exercise. The clip, though only a brief highlight reel, shows an Il-76 refueling probe extending toward a Su-34. A slightly longer YouTube video of the same event depicts the moment when the probe attaches to the Su-34. This recent exercise is to be distinguished from others of its kind in that the Su-34 not only refueled under harsh weather conditions but did so while fending off intermittent jamming attempts.

The Su-34, NATO reporting name “Fullback,” was introduced in 2014 and continues to be in high demand throughout the Russian armed forces. Most recently, Russia's Central Military District has begun assembling its second Su-34 squadron after forming its first in early 2018. “Currently, we have begun the process of forming the second Su-34 squadron within our regiment. We have received eighteen of these units since 2018, and plan to receive another six by the end of 2019.”

As previously explained by The National Interest, the Su-34 concept is actually quite old. Development began as early as the 1980’s, but stalled from a lack of funding in the aftermath of the 1990’s Soviet collapse. The Su-34 program was revived in earnest only by 2005, with many of its core components verging on obsolescence.

But rather than abandoning the Su-34 platform altogether, the VKS opted to modernize it with the same updated avionics suite as many of its staple Soviet-era aircraft: digitized onboard displays, navigation system improvements, and enhanced electronic countermeasure (ECM) capability. The latter is a particularly strong development focus of the Su-34, with Russian engineers claiming that an ECM-specialized Su-34 can provide such effective cover for multiple fighters that they would “simply disappear from enemy radars.”

Except for a brief, limited Su-57 test run in the latter stages of the Syrian Civil War, the Su-34 is widely regarded as the most technologically advanced aircraft to be deployed by the Russian Air Force (VKS) in Syria. Air-to-air missile equipped Su-34’s first began to fly began in Syria as a Russian deterrent measure in response to the November 2015 Turkish downing of a Su-24 fighter.

As prolifically manufactured and deployed as the Su-34 continues to be, the Fullback has had its share of unflattering headlines. Earlier this year, two Su-34’s collided over the Sea of Japan. In one of Russia’s worst military aviation accidents over the past decade, at least two of four crew members were confirmed dead.

Russia’s Ministry of Defense attempted to mitigate the fallout with a press release blaming “pilot error”; in the absence of major prior Su-34 accidents, pilot error is not outside the realm of possibility. Even so, reports that the VKS decided to cancel all Su-34 flights in the immediate aftermath of the accident suggests that the Russians at least didn’t rule out the possibility of technical failure.

With their most recent, communication and ECM-focused modernization program underway as of last year, the VKS aims to maintain the Su-34 as the backbone of their tactical bomber force for decades to come. A similar Russian preference for pursuing deep modernization of existing platforms rather committing to the R&D costs of a new platform can also be observed with the Tu-22M3M, the most recent iteration of Russia’s staple strategic bomber.