Violence Mounts in Iraq as Sadrists Attempt To Form a Government 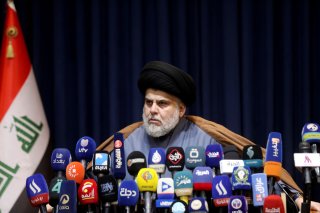 Iraq’s new leadership, dominated by the “Sadrist Movement” electoral alliance, faced its first major security challenge as a wave of sectarian violence swept through Baghdad this past week. This surge in violence will pose a challenge to the Sadrist Movement as it attempts to form a majority government following its victory in Iraq’s October 2021 elections.

On Thursday afternoon, a rocket attack on the U.S. Embassy inside Baghdad’s “Green Zone” injured several civilians, including a child. The following day, hand grenades were thrown at the headquarters of the Sunni Taqaddum party, which is led by Iraq’s parliament speaker Mohammed Halbousi, and the offices of prominent Sunni politician Khamis al-Khanjar. Finally, on Sunday, two banks associated with politicians from the country’s Kurdistan autonomous region were attacked in central Baghdad, resulting in two injuries.

No group within Iraq has claimed responsibility for any of the attacks. The attacks mark the most recent bout of unrest since the country’s new parliament was sworn into office earlier this month.

The new parliament’s first session, which took place on January 8, quickly descended into violence after Halbousi, an ally of Shia kingmaker Muqtada al-Sadr, was reelected to his speakership. Halbousi was confirmed by votes from the Sadrist Movement and the Kurdistan Democratic Party (KDP). However, he was strongly opposed by Sadr’s opponents, including the “Fatah Alliance,” a coalition of Iranian-linked Shia parties, and the Shia “State of Law Coalition,” led by former Prime Minister Nouri al-Maliki. Ongoing negotiations to pick a new president should be completed within thirty days, as specified in Iraq’s constitution.

Sadr, who is one of the most powerful men in Iraq despite not holding any elected office, has openly criticized the country’s fractious political system in the past. He has been particularly critical of the muhasasa system, which implements de facto sectarian quotas for political office. One of the system’s key stipulations states that the country’s prime minister should always be a Shia, the speaker of parliament should be a Sunni, and the largely ceremonial president should be a Kurd.

The muhasasa system has come under fire from Iraqi protesters in recent years, and its abolishment was a major goal of the united opposition protests that began in October 2019. The protests resulted in the resignation of former Prime Minister Adil Abdul-Mahdi, who was regarded by many demonstrators as overly sympathetic to Iranian interests.

Sadr, who has cultivated a reputation as an Iraqi nationalist opposed to foreign influence from both Iran and the United States, is expected to play a major role in potential reforms to the country’s electoral system in the coming years. He has proposed the elimination of sectarian quotas in favor of a “national majority government.” Such a government would presumably include his Sunni and Kurdish allies and exclude his other Shia opponents.

“Today, there is no place for sectarianism or ethnic division, but a national majority government where the Shia defend the rights of minorities, the Sunnis and Kurds,” Sadr tweeted prior to the first parliamentary session.

However, experts have warned that sidelining the opposition could result in further violence, as groups unable to win elections might turn to violence to secure their political goals.