Voter Suppression Is A Myth, But Liberals Can't Get Over It 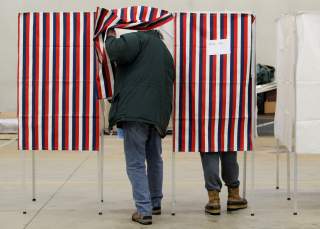 I received a strong dose of the misinformation warping the minds of young people this past weekend when I spoke on a panel on the subject of election integrity at the Washington conference of Junior State of America.

Conference attendees were high school students from the northeast and southeast parts of the country. I was on a five-member panel—and the only conservative on the panel—in a standing room-only crowd.

As you might imagine, the focus of the liberals on the panel was the “voter suppression” meme that the left has been pushing for years to scare voters and their constituencies.

It’s a false narrative belied by the facts, such as the relatively high levels of turnout in a non-presidential year in 2018 in many states, including in Georgia, or the numerous studies that have concluded that voter ID laws are a commonsense reform that does not keep voters out of the voting booth.

One of those studies, released by the National Bureau of Economic Research in 2019, examined 10 years’ worth of turnout data from across the country and concluded that voter ID laws have “no negative effect on registration or turnout overall or for any specific group defined by race, gender, age, or party affiliation.”

A young woman asked me a question about institutionalized racism in the U.S. and implied that it was the fault of conservatives.

While being a conservative does not necessarily equate with being a Republican, I strongly denied that conservatism accepts, approves, or has anything to do with racism, and pointed out that, in fact, a larger percentage of Republican members of Congress than Democrats voted for the passage of the Civil Rights Act of 1964.

Another member of the panel—the head of DC Vote, which wants the District of Columbia to get U.S. senators and representatives, just like a state—loudly scoffed and guffawed, obviously letting the audience know that he believed that what I said was untrue. Many of the more liberal students in the audience joined him.

These students do not appear to know the history of the Democratic Party’s participation in segregation, the imposition of Jim Crow, and the genuine and terrible suppression of black citizens after the end of Reconstruction and up to and through the civil rights movement of the 1960s.

But according to PolitiFact, which I assume is a source that all of the liberals on the panel (and in the audience) would consider to be reputable, here is how the votes went on the Civil Rights Act of 1964:

Although I didn’t mention this in my answer, the same thing happened with the Voting Rights Act when it passed in 1965:

So, I was right, and the scoffers were wrong.

Time was running short, so I did not get to say one final thing that I’m sure would have raised the hackles of my fellow panelists.

The one place where institutionalized racism—in the form of the explicit use of racial preferences—appears to be alive and well is in the admissions offices of Ivy League colleges and many other universities across the country.

Most, if not all, of the students in that room attending the Junior State of America conference will soon be applying to college. For some of them, the color of their skin will help get them into schools, while for others—such as Asian American students—their ethnic background will be held against them.

That’s something these students should be angry about, because all of their hard work, extracurricular activities, and community involvement may end up being discounted when they apply to college based on the color of their skin. And that’s nothing to scoff at.