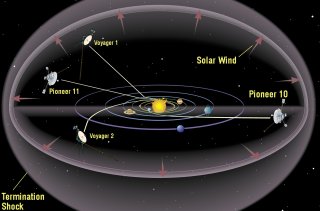 Here is the good news: Voyager 1 and 2 spacecraft have entered interstellar space. The bad: When they finally reach another star system, you’ll likely be long gone.

But that shouldn’t stop you from marveling at the pure scientific genius that has continued to propel these two probes for more than 40 years. And still, they are transmitting data back to Earth, lighting up the darkness in the outer reaches of our solar system and hopefully beyond.

Voyager 1 and Voyager 2 launched a few weeks apart in 1977 and were given the monumental task of performing an unprecedented “grand tour” of the solar system’s giant planets. Voyager 1 managed to fly by Jupiter and Saturn, and Voyager 2 followed suit and then zipped past Uranus and Neptune as well.

In August 2012, Voyager 1 made its historic entry into interstellar space, a first for a man-made object. Then Voyager 2 did the same on Nov. 5, 2018 – still amazing to think that these two probes, launched four decades ago, are still technically within our solar system.

And they won't be leaving anytime soon, as the boundary of the solar system is considered to be beyond the outer edge of the Oort Cloud, an assortment of objects that are still under the influence of the sun’s gravity. It will likely take about 300 years for Voyager 2 to reach the inner edge of the Oort Cloud – and possibly 30,000 years to fly past it.

Voyager 2’s achievement in reaching interstellar space was confirmed by comparing data from different instruments – namely, the cosmic ray subsystem, the low energy charged particle instrument and the magnetometer – aboard the spacecraft. Mission scientists determined that the probe crossed the outer edge of the heliosphere, the protective bubble of particles and magnetic fields created by our sun. This particular boundary, which is called the heliopause, is where the hot solar wind meets the cold and dense interstellar void.

The Voyager probes are powered by using heat from the decay of radioactive material, which is contained in a device called a radioisotope thermal generator. The power output falls by about four watts per year, which means that they will run out of power supply likely within this decade.

Voyager 1’s next big encounter will take place in 40,000 years when it will come within 1.7 light-years of the star AC +79 3888, located some 17.5 light-years from Earth. But because Voyager 1 will be out of power supply, no data will be shared.