Wanna See China Freak Out? Call for an Olympics Boycott. 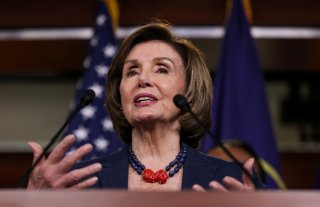 The 2022 Beijing Winter Olympics may still be nine months away, but there is already controversy brewing as Speaker of the House Nancy Pelosi (D-Calif.) called for a “diplomatic boycott” of the games over China’s human rights violations.

“We cannot proceed as if nothing is wrong about the Olympics going to China,” Pelosi told Congress’ Human Rights Commission and the Congressional-Executive Commission on China during a hearing on the games earlier this week. “Sadly we are here because China continues to crush all political dissent.”

The House Speaker added the United States has an obligation to “speak out against human rights violations in China.”

Activists and lawmakers from both parties have also called on President Joe Biden to bow out of the 2022 Olympics in protest. They have cited China's reported treatment of Uyghur Muslims in Xinjiang—which both the Trump and Biden administrations have called a genocide—as well as Beijing's response to recent protests in Hong Kong, CNBC reported.

Yet, Pelosi has also acknowledged that boycotts of the Olympic Games “have not succeeded in the past.”

China has issued a quick response and took direct aim at Speaker Pelosi.

"Some U.S. individuals’ remarks are full of lies and disinformation,” a foreign ministry spokesperson, Zhao Lijian, said on Wednesday, according to a report from The Guardian. “U.S. politicians should stop using the Olympic movement to play despicable political games” or using “the so-called human rights issue as a pretext to smear and slander China.”

Beijing has also suggested the boycott would politicize sports.

Some people with fewer ties to the Olympics have also said it would be unfair to use U.S. athletes, who have trained for years for what is often a once-in-a-lifetime opportunity, as pawns in political brinkmanship.

Sarah Hirshland, the CEO of the United States Olympic and Paralympic Committee, in a letter to a member of Congress argued against a boycott.

Hirshland explained that the games were particularly important after the pandemic, even as there are “valid concerns” about China’s human-rights policies.

“The world spent more than a year isolated, quarantined, and afraid,” Hirshland said. “Thousands of competitors from around the world standing before the Olympic and Paralympic flame will mark the world’s emergence from the past year’s troubles.”

“We, too, are troubled by the situation in China,” she added. “However, an athlete boycott of the Olympic and Paralympic Games is not the solution to geopolitical issues. Both the 1980 and 1984 Games (boycotts) tainted Olympic history and showed the error of using the Olympic Games as a political tool.”

Instead of a boycott, Rep. Jim McGovern (D-Mass.) suggested relocating the games, even if that meant delaying the 2022 Winter Olympics by a year.

“If we can postpone an Olympics by a year for a pandemic, we can surely postpone the Olympics for a year for a genocide,” suggested MGovern. “This would give the IOC time to relocate to a country whose government is not committing atrocities.”