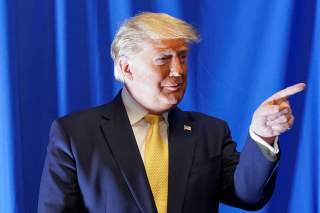 Here’s some advice for frustrated impeachment advocates who think there might be other ways to force Donald Trump out of office: The 25th Amendment won’t help you.

But that hasn’t stopped people from trying.

Andrew McCabe, former deputy director and acting director of the FBI, gave the Constitution’s 25th Amendment a shoutout in February.

In an interview with “60 Minutes,” McCabe claimed that people in the Department of Justice, including Deputy Attorney General Rod Rosenstein and McCabe himself, had discussed trying to get a majority of the Cabinet to agree to remove Donald Trump from office. (Rosenstein denied the story, but it didn’t go away.)

If that majority vote is all the amendment requires, it would provide a much easier process than impeachment to dump a president.

Writing in The Wall Street Journal, prominent conservative lawyers David B. Rivkin and Lee A. Casey wrote that, if those DOJ discussions in fact took place and were serious, the participants were part of “a conspiracy by government officials against American democracy.”

That sounds awful, but any such technical conspiracy – if that’s what it was – was doomed to failure.

If the DOJ lawyers thought getting rid of a president – this one or a future holder of the office – was easy, they hadn’t studied the amendment’s language.

I’m a professor of law – a tax professor at that. I’m used to parsing difficult legal language, and I’ve written about constitutional issues as well as ones that arise in bean-counting. The 25th Amendment is a complex law that is, by design, very hard to use.

A little history: The 25th amendment was ratified in 1967. A primary purpose was to provide a way to fill the vice presidency when that office becomes vacant.

Since then, the amendment’s system to fill the vice presidency has worked as intended, twice, and without controversy. The first was in 1973, with Gerald Ford, after Spiro Agnew was forced to resign after pleading no contest to a tax evasion charge. The second was in 1974, when Nelson Rockefeller became vice president after Nixon resigned and Ford became president.

The amendment also sets out processes for the vice president to become “acting president” in two situations.

The first, the easy case, is when the president himself sends a written declaration to the speaker of the House and the president of the Senate that “he is unable to discharge the powers and duties of his office.”

The president says, in effect, “I can’t handle the job right now, but I’ll be back.”

The vice president steps in temporarily, and the president reassumes presidential duties when he notifies congressional leaders that he’s up to it.

This part of the amendment has been applied, without fanfare, a couple of times when a president was going to be briefly incapacitated because of anesthesia. Some historians believe that having a formal method for a temporary transfer of power would have been helpful when Dwight Eisenhower had serious health problems.

But the rules applicable to the other situation in which a vice president can become acting president are much less clear.

Somehow the idea got around – reflected in the alleged DOJ discussions – that, if some officials think a president is incapacitated, but he disagrees or is so out of it that he can’t voluntarily step aside, a majority of the Cabinet can promote the vice president.

I believe that understanding is wrong.

To begin with, under the 25th Amendment it’s “the Vice President and a majority of either the principal officers of the executive departments or such other body as Congress may by law provide” who must make the declaration of incapacity to congressional officers.

If Vice President Pence sides with the president – as I believe he would unless Trump were clearly incapacitated – it doesn’t matter what Cabinet officials think.

And “principal officers of the executive departments” doesn’t necessarily mean the Cabinet, although it could. “Cabinet” isn’t a constitutional term.

It’s up to the president who sits in his Cabinet, or, for that matter, whether the Cabinet sits at all. Not everyone in the Trump Cabinet is a principal officer of an executive department: the U.N. ambassador and White House chief of staff, for example. And many people who head federal agencies, and who therefore might be treated as “principal officers of executive departments,” aren’t in the Cabinet – like the secretary of the Navy.

It’s hard to determine whether there’s a majority of principal officers on board if it’s not clear who gets counted for this purpose. Besides, the president could change the numbers by firing principal officers, whoever they might be, if he learns that a revolt is brewing.

The amendment does permit Congress to provide for an alternative body that can, with the agreement of the vice president, make an initial determination of presidential incapacity.

It would be nice if Congress had done this at some point in the past 50-some years, to provide more certainty about what should happen when a president is incapacitated. But I believe Congress is unlikely to act under the 25th Amendment until political tensions have eased – whenever that might be – and a different president is in office.

In any event, even if there were no computational difficulties, and even if the vice president were to agree that the president is incapacitated, the amendment doesn’t provide for actually removing the president from office.

Instead, the president remains president; the vice president only becomes “acting president.” In such circumstances, the president would have little or no formal power, of course. But it’s unlikely his Twitter account would be shut down.

The president doesn’t go away

Furthermore, a deposed president can return to power.

Under the amendment, once the president declares “that no inability exists,” he resumes presidential duties, unless the acting president and a majority of principal officers – that phrase again! – disagree and Congress, by a two-thirds vote of both houses, also disagrees.

Given those stringent requirements, a president is likely to get power back quickly if he wants it, unless his incapacity is beyond dispute (as was the case with Woodrow Wilson, in pre-25th Amendment days).

Those who want President Trump out of office should forget about the 25th Amendment; it won’t work as they hope or believe.

After publication of the Mueller report, much of the discussion about removing Trump has shifted to the possibility of impeachment.

But, with Republican control of the Senate, that process is unlikely to lead to a conviction.

If removal of the president is the goal, those who want it will probably need to try the old-fashioned method: the ballot box.