Want to Beat Trump in 2020? Then Don't Bring Back Hillary Clinton. 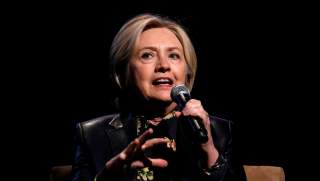 Let us stop the speculation now. There is no credible reason to believe Hillary Clinton is seriously considering entering the 2020 U.S. Presidental race. Why would Hillary want to get pummeled by a woman who wasn’t even in Congress when she was a senator and a man whom she beat in 2008? She has no chance of winning. Period.

Nor are there any serious Democratic leaders who want her to enter the race. Rather, there are a number of conservative movement players who, when looking at polls showing Trump losing to all of the Democratic frontrunners, Biden leading in Arizona, and a sharp shift in polls in favor of impeachment, wish Clinton were to run against him.

Steve Bannon started the recent round of talk on September 30 when he, apropos of nothing but the fact that Clinton wrote a book, said on Fox Business that he expected Clinton to run. Donald Trump tweeted that he wanted Clinton to run on October 8. Only in response to Trump did Clinton joke, “Don’t tempt me.” That, and a comment to PBS’s Judy Woodruff, was enough for speculation by Fox News’s Tucker Carlson, Laura Ingraham, Greg Gutfeld and Mark Steyn and Politico Playbook’s Jake Sherman to run rampant.

You know who isn’t pleading eagerly for Hillary to run? Actual Democratic voters or strategists.

Democrats are actually satisfied enough with the candidates in the race. Joe Biden has a 70.7 percent approval rating among Democratic voters, according to a September post-debate survey by Ipsos in partnership with FiveThirtyEight. Sixty-nine percent approve of Bernie Sanders and 68.5 percent approve of Elizabeth Warren. Seventy-five percent of Democrats are “generally pleased with the candidates” this year, according to a just-released October 9 survey by Gallup, much higher than in 2006, 2002-03, and 1992.

The biggest issue for Democrats is defeating Donald Trump. Why would Democrats want to nominate someone who already failed to defeat Trump? Why would they nominate one of the few major candidates whose nationwide approval rating is almost as low as Trump’s?

Gossip among the bored and politically-obsessed in D.C. is nothing new, and it is almost always, in the words of candidate Biden “malarkey.” Comparable speculation about whether Mitt Romney would run again (against a different opponent, for that matter) ended in January 2015 when Romney announced he wouldn’t. It should have ended in March of this year when Hillary announced she wouldn’t run.

Now we are in the era of the Twitter President and the Trump-Fox News perpetual news cycle machine. Trump can start a narrative, push it to Fox News, then have Fox and Friends feed it back to him the next morning. With so many high profile investigations going, there is also much irresponsible speculation about thinly-sourced things reported as news before the process of investigation ends. First, it was emails, then Russia, now reporters are frantically speculating about the identity of one of the two whistleblowers and whether that whistleblower is a Democrat (which would seemingly disprove all of their claims and the contents of the phone call memo). Remember when Trump's family members were indicted like John Brennan speculated on MSNBC?

All this is to say journalists should be more patient as stories develop and readers should be skeptical of speculation—if they aren’t already. Just because someone served as an official years ago or has an office on K Street doesn’t mean they know anything more than a reader at home—in fact, they might know even less.

Mitchell Blatt is an editorial assistant at the National Interest.