Want to Build Your Very Own Russian Bomber Like This Monster? 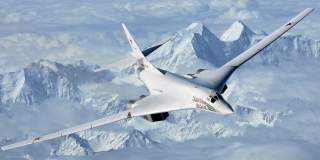 Want to build your own Russian bomber?

Not that Russia will sell you a Tu-160 bomber, a four-engine, 178-foot-long strategic bomber designed by the Soviet Union during the Cold War to drop nuclear weapons on distant targets such as the United States.

But the factory equipment that built the Tu-160 is being scrapped, leading some Russians to fear that the industrial infrastructure that built the massive Soviet military machine is disintegrating.

Indeed, Russian defense magazine Military-Industrial Courier is calling for anyone who knows of old Soviet defense manufacturing equipment being scrapped to let the magazine know, in the hopes that some company can use the machinery to meet Russia’s current defense needs.

“Since the days of the USSR, dozens, if not hundreds of enterprises of the ‘defense industry’ have left a huge amount of unique equipment,” laments Military-Industrial Courier. “Some has already been scrapped, but much has certainly been preserved and can be used with great benefit - not only by the current owners, but by other enterprises, especially new ones, which are in the process of development.”

The magazine cites a letter from aviation firm Tupelov to Sergey Chemezov, head of the giant state-owned arms corporation Rostec, which speaks of “preserving the unique equipment that was used at the time when creating the prototypes of the strategic supersonic Tu-160 bomber, and now to be disposed of.”

In particular, the letter “speaks of a unique electron-beam welding installation ELU24x8, which has no analogues abroad and allows you to implement technological schemes that are inconceivable under ordinary conditions.” The device was created to manufacture large, welded components for advanced aircraft, particularly the center-section beams of the Tu-160, to which the wings, landing gear and engines are attached.

The welding system was mothballed in 1998 as funding for defense projects dried up. “Experts emphasize the value of the high-precision machine-tool complex ELU24x8 and note that today in Russia there is hardly any enterprise capable of reproducing such or such an assembly, which is extremely necessary for robotic electron beam welding.

The cost of building the welding unit from scratch would be more than 2.5 billion rubles (US$40.3 million).

But Tupelov doesn’t need the welding unit anymore, so it’s going to be scrapped -- and no one in Russia wants to bother trying to salvage it, Military-Industrial Courier complains. “In order to find those who need a unique installation, you need to apply energy, and nobody wants to do this - it’s easier to dispose of, so as not to interfere with a quiet life.”

All of which raises the question of what will happen to the massive – but aging – Soviet-era defense manufacturing infrastructure. That massive investment in heavy machinery and advanced technology wasn’t free: Soviet citizens paid for it through scarce consumer goods and poor housing.

Not that the United States is immune, except that in America, capitalism is the culprit. Older weapons – such as the F-22 from the late 1990s – suffer from lack of spare parts because the original equipment manufacturers are no longer in business, or production lines have been shot down because production was no longer profitable.

Michael Peck is a contributing writer for the National Interest. He can be found on Twitter, Facebook. or on his personal Web site.