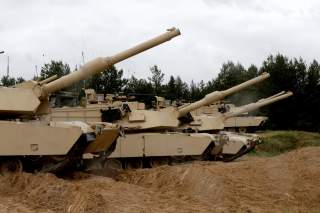 Key point: Taiwan has long been interested in purchasing M1A2 tanks from the United States.

Taiwan is once again interested in purchasing Abrams tanks from the United States.

Yen said that the tanks would provide the last line of defense against a Chinese invasion. Besides immediately improving Taiwan’s combat readiness, he indicated that the sale would also involve technology transfers that could enhance the country's domestic arms industry.

The M1A2 is the third iration of the M1 Abrams tanks after the original and the M1A1. Washington first authorized production of the M1A2 tank in 1990, according to Military.com, and it first entered into service in 1992. The same source notes that the M1A2 has a similar exterior to its predecessor, with the biggest change on the outside of the tank being the “redesigned Commander's Weapon Station (CWS) and the addition of a Commander's Independent Thermal Viewer on the left side of the turret forward of the loader's hatch.”

There are major changes inside the M1A2 tank, however. Perhaps most notable is the addition of the Inter-Vehicle Information System (IVIS), which allows for the continuous and automatic exchange of information between vehicles. The M1A2 tanks can travel at speeds of up to 42 miles per hour. As far as armaments go, the tank’s main gun is a 120mm XM256 Smooth Bore Cannon with forty rounds. Supporting arms include two 7.62mm M240 coaxial machine guns and one 12.7mm machinegun.

Taiwan has long been interested in purchasing M1A2 tanks from the United States. According to a Congressional Research Service (CRS) report, Taipei first asked for the tank in the early part of the George W. Bush administration. Although President Bush initially deferred the decision on the tanks, he ultimately approved it in late 2001. The CRS report adds that “in the fall of 2008, the U.S. Army briefed Taiwan’s army on the M1A2 tank and an upgraded M8 armored gun system. By early 2009, Taiwan’s army estimated the total cost of under 150 new tanks at about US$2.9 billion.”

This initial request appeared to bog down among other priorities from Taiwan’s Ministry of Defense. Taipei’s interest was renewed during the Obama administration as the United States began winding down the wars in Iraq and Afghanistan. This prompted Washington to explore selling some of the surplus Abrams tanks it no longer needed due to a decreased operational tempo. In 2015, Defense News reported that “The Taiwan Army has a requirement for two to four battalions of surplus US Army M1A1/M1A2 main battle tanks, but this is still in programming stages.” The same article also noted, however, that the “tanks are not given a high priority with Taiwan's mountainous interior and low coastal wetlands. Bridges are also a problem as many in the rural areas are too weak after years of earthquakes to handle the 60-ton M1 tank.” There were also concerns in Taiwan that the country’s military lacked sufficient training grounds for the tank, as more of its land was given to civilian industries.

Still, Taiwan’s renewed interest in the Abrams comes as something of a surprise. Taipei had announced in October 2017 that it would locally upgrade its U.S.-made M60A3 main battle tanks. At the time, Defense News and others noted that these upgrades indicated that “Taiwan appears to have conceded defeat in its quest to acquire surplus M1 Abrams tanks from the United States.” The contract for the upgrade was worth $6.57 million and called for upgrading approximately 450 M60A3 TTS tanks. The upgrades include installing a 120mm weapon to serve as the tank’s new main gun. The M60A3 first entered into service in the United States in the 1970s.

Besides the M60A3 tanks, Taiwan also operates 400 CM-11 Brave Tiger tanks. These have been described as “a hybrid M60 chassis fitted with the turret from the older M48 Patton and the fire control system of the M1 Abrams.” There has also been talk of upgrading the CM-11 tanks after the upgrades of the M60A3s are complete. The CM-11s are even older than the M60A3s. Taiwan’s army also has some lighter tanks like the M-48 and CM-12, which is a modified M48A3.

Besides the United States, Saudi Arabia and Kuwait currently operate the M1A2 tanks while other countries have older versions of the Abrams.

Zachary Keck (@ZacharyKeck) is a former managing editor of the National Interest. This article first appeared several years ago.