Want a Russian Stealth Fighter or S-400 But Fear U.S. Sanctions? This Might Be the Solution. 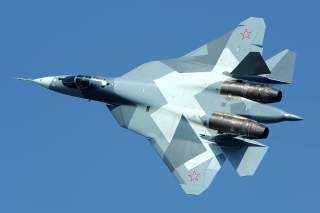 Russia may have found a neat trick to evade U.S. sanctions that bar countries from buying weapons from Russia.

Customers reselling Russian weapons to a third nation will simply not officially notify Russia about the sale.

“The new decree relaxes export control rules that required secondary arms buyers to inform Russia in writing that it was the final buyer,” according to the Moscow Times. “These countries can now avoid direct contact with Russia by making the primary arms buyer responsible for informing Moscow that the secondary buyer vows not to resell the weapons.”

In other words, Russian arms can be resold to a third party, with the reseller avoiding contact with Moscow and thus potentially being penalized by U.S. sanctions.

The change was sparked by the U.S. government’s 2017 Countering America’s Adversaries Through Sanctions Act, or CAATSA,  according to Russian news publication Vedemosti. Among the law’s provisions are bans on transactions with Russia’s defense or intelligence sectors. “Foreign states express interest in buying Russian military products, but fearing to be subject to sanctions, refuse to purchase it,” complained the Russian government decree authorizing the new arms transfer arrangements to bypass CAATSA.

And that’s bad news for a sagging Russian economy. “Export is the most important component of the revenues of the Russian defense complex,” noted Vedemosti. “Since 2013, annual arms sales amount to $15 billion to $16 billion.”

Soviet and Russian arms have been ubiquitous in conflicts around the world for decades. But Russian policy over who uses its weapons has become tighter in recent years, Vedemosti said. “Control over users of Russian weapons was tightened after Israeli forces seized the Kornet anti-tank systems that were previously delivered by Russia to Syria during the Israeli war against the Lebanese Hezbollah movement. In 2006, the government adopted a decree according to which the MTC FS obtained the right to include, when concluding contracts for the supply of small arms and light weapons, items allowing inspections to verify the presence of sold weapons from the buyer.”

One Russian defense analyst told Vedemosti that U.S. sanctions don’t affect the biggest buyers of Russian weapons: China, India, Vietnam, Algeria and Egypt. “These countries either ignore U.S. sanctions against Russian exporters, or seek exceptions for themselves in negotiations with the U.S. authorities. But for small countries fearing U.S. sanctions, sales using re-export mechanisms may be justified.”

“Any parties conducting significant transactions with the defense or intelligence sectors of the Russian Federation would be at risk of CAATSA sanctions. We are always looking at ways that countries may try to avoid U.S. sanctions and will take appropriate steps to ensure we can fully implement our sanctions authorities regardless of Russian or other countries efforts to evade sanctions. We are committed to upholding the integrity of our sanctions program and will diligently monitor Russia arms sales for activities subject to U.S. sanctions.”