Want to Talk About Iran’s Ballistic Missiles? First Save the Nuclear Deal 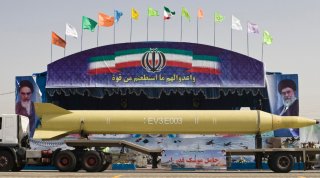 More than three decades after its formal end, the twentieth century's longest interstate war lurks mostly in the dim recesses of global consciousness. In Iran, however, the traumatic memories of the Iran-Iraq War (1980-1988) continue to gnaw at the national psyche. Having left an indelible mark on the country’s perception of threats in its periphery and, therefore, its defense doctrine, the war with Iraq lives on in political parlance as a system of cues and symbols, adduced by the ruling elites to garner public support for instruments of military deterrence, including its controversial ballistic missile program.

Emboldened by the state of disarray among Iran’s armed forces in the wake of the 1979 Islamic Revolution, the late Iraqi dictator Saddam Hussein would exploit the porosity of Iran’s defenses and invade the nascent republic to his east from multiple fronts. In a war that would ultimately claim the lives of hundreds of thousands of combatants and civilians, the full panoply of Iraq’s bloated war machine—which enjoyed unswerving political, economic, and military backing from Europe, the United States, the Soviet Union, and almost the entirety of the Arab League—was brought to bear on Iran.

Though the war had exposed several glaring chinks in Iran’s armor, it was the porosity of its air defenses that was most poignantly felt within the country. Hobbled by international embargoes, the Iranians could do precious little to deter Saddam from pounding their urban centers and troops with aerial bombardments and missiles, often laced with chemical and biological agents. Ironically, Iran’s only saving grace in the skies was its fleet of American-built military aircraft, purchased during the Shah’s reign. But even this silver lining would soon be wrapped in a cloud of arms embargoes that made it increasingly cumbersome for Iran to keep its fighter-jets operational.

Today, after four decades of acute maintenance and logistical problems owing to a cocktail of international sanctions, Iran’s aging fleet of aircraft have slid further towards dilapidation, and it faces insurmountable difficulties to domestically produce or purchase the surfeit of state-of-the-art Western military aircraft and surface-to-air missiles systems that have inundated regional rivals like Israel and Saudi Arabia. As military analyst Anthony H. Cordesman, known for his close ties to the American and Israeli defense establishments, observes in his assessment of Iran’s Rocket and Missile Forces and Strategic Options, “air balance in the region decisively” favors the United States and its Arab allies, who “have a decisive advantage in air and surface-to-air missile quality and quantity, and the U.S. can rapidly deploy a massive superiority in every aspect of air and cruise missile power including stealth aircraft, carrier and land-based forces.”

Fully cognizant of the constraints on their capacity to deter rivals militarily, the Iranians would turn to less technologically advanced—and more affordable—weaponry such as ground-to-ground missiles and drones to mitigate, albeit slightly, the far-reaching consequences of their abject aerial inferiority vis-à-vis the United States and its allies.

Three decades after the end of the war with Iraq, Iran’s ballistic missile program is no longer an embryonic development. It has fully metamorphosed into a reliable component of its military deterrence strategy, baked into the national psyche as an indispensable geostrategic asset.

It should excite little surprise, then, that despite systematized efforts in the West to cast Iran’s ballistic missile program as a source of regional instability and belligerence, it continues to enjoy widespread support among the masses of the Iranian people. This is confirmed by a recent survey of Iranian public opinion conducted by the Center for International & Security Studies at Maryland (CISSM), which shows that a whopping 66 percent of respondents believe that ballistic missiles reduce the likelihood of other countries attacking their country.

Support for Iran’s missile program transcends ideological divides, too. Indeed, some of the program’s staunchest supporters may be found in Iran’s reformist camp.

A case in point is Mostafa Tajzadeh, a towering figure in the pro-democracy movement who has spent seven years behind bars, much of it in solitary confinement, for his political views. His excoriation of the Islamic Revolutionary Guards Corps’ (IRGC) meddling in Iran’s economic and political affairs notwithstanding, Tajzadeh has been steadfast in his support for Iran’s right to bear ballistic missiles. “Missiles are a part of the country’s military defense,” he recently told me, “asking us if we want missiles is akin to asking us if we want tanks. Of course, we do. We need them to defend ourselves.” “For a political figure to come out against Iran’s missile program,” he added, “is to fall outside accepted political discourse.”

Tajzadeh, who held key positions in the administration of reformist President Mohammad Khatami, added that “there has not been an Iranian government without plans to develop the country’s missile program. Its development may have waxed and waned at times, but it has never totally ceased.”

Indeed, the missile development appears to have remained largely impervious to political change within the country. As Major General Hossein Dehghan, former defense minister and chief military advisor to the Supreme Leader Ali Khamenei, recently admitted, the development of certain aspects of the country’s missile program had begun during the presidency of Mohammad Khatami and was completed during the tenure of Hassan Rouhani. Tellingly, Khatami’s conciliatory foreign policy was encapsulated by his “Dialogue of Civilizations” initiative, while Rouhani campaigned on a promise to engage with the West.

But the firmly-entrenched consensus on the imperative need for a ballistic missile program as an instrument of deterrence does not automatically preclude the possibility of Iran and Western powers reaching a form of understanding on the matter. It is, for example, still an open question whether Iranians—both at the level of the populace and ruling elite—would be willing to make compromises on certain aspects of the ballistic missile program, such as the maximum range of Iran’s projectiles. Indeed, the above-cited CISSM poll shows that Iranians were “somewhat less negative” towards limiting the range of Iran’s missiles.

This flexibility on missile range was also detectable during my conversation with Tajzadeh. Despite his firm position on Iran’s right to self-defense through ballistic missiles, he said he was not fundamentally opposed to the prospect of reaching an understanding with foreign powers on missile range without compromising Iran’s deterrence capacity: “The range of missiles is not a fundamental matter.”

This view has already found expression in the person of Major General Hossein Salami, commander-in-chief of the IRGC, who hinted in 2017 that the range of Iran’s missiles was not set in stone but was a function of Tehran's threat perception.

Though such statements, as well as opinion polls, suggest that future talks on missile range are not impossible, a diplomatic climate conducive to such talks is yet to be achieved. Donald Trump’s foreign policy has engendered in Iran’s threat perception a shift unfavorable to engagement with the West on instruments on national security.

Thrust into Iran’s geopolitical calculus are entirely new precedents that have hardened the country’s stance towards such talks. In the aftermath of Trump’s abrogation of the landmark nuclear deal—also known as the Joint Comprehensive Plan of Action (JCPOA)—and his reimposition of sanctions on Iran, policymakers in Tehran must henceforth make allowances for the reality that the stroke of a pen is all that separates a sitting U.S. president from reneging on the commitments of his predecessor, even if Iran lives up to its end of the bargain. Trump’s “maximum pressure” campaign has impressed on Iranian decisionmakers the truism that international agreements alone cannot protect it against a global superpower hell-bent on riding roughshod over the interstate order and coercing others into following its diktats. Iran’s inertia against further compromises over its strategic assets was further cemented after the brazen assassination of its top military figure General Qassem Soleimani on Trump’s orders and, later, its prominent nuclear scientist Mohsen Fakhrizadeh, widely believed to be an Israeli hitjob.

Despite the relative easing of tensions between the United States and Iran following Joe Biden’s investiture in January, Iran and the United States are still a long way away from a political climate conducive to any talks on ballistic missiles. The Biden administration has yet to lift the Trump-era sanctions and ensure the nuclear deal’s long-term survival. Until then, Iran’s reluctance to engage in talks on other matters of grave national security concern is unlikely to loosen.

The centrality of the nuclear deal to any future talks is reflected in the CISSM’s aforesaid survey of Iranian public opinion. Respondents were asked how Iran should respond to a U.S. invitation for talks on issues other than the nuclear deal (e.g., Iran’s ballistic missiles and its military support for allies in the region) if the United States returns to the agreement, and both countries are in full compliance with the deal. A 54 percent majority preferred to wait and negotiate after a few years of U.S. compliance, 30 percent would not negotiate even at that point, while only 12 percent were willing to negotiate immediately.

Unless the United States, Iran, and other parties to the deal succeed in fully reviving the JCPOA and ensuring its long-term survival, the outlook for meaningful talks over the country’s ballistic missiles, or any other instrument of deterrence policy for that matter, will likely remain bleak.