Want to Understand Chinese History? These 5 Events are the Key. 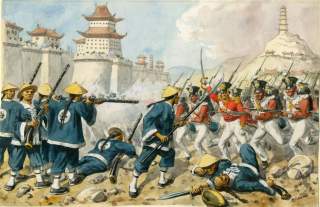 What was it? Having led the Chinese Communists to victory in the civil war against the Nationalists (1949), Mao Zedong was able to institute the radical agricultural and industrial “reforms” of the Great Leap Forward (1958-1961). The results were disastrous. Tens of millions starved during the “Great Famine” (大饥荒). Officials were initially reluctant to report the truth for fear of being persecuted, but when the extent of the disaster became known, moderates like Deng Xiaoping began to edge Mao out of power. Mao responded by launching the “Great Proletarian Cultural Revolution,” in which students were encouraged to drop out of school and join the paramilitary Red Guards. With all the mercy of the Inquisition and all the objectivity of the Salem Witch Trials, the Red Guards humiliated, tortured, and killed whoever appeared to them to be a supporter of “feudalism” or “capitalism.” On my most recent visit to China, I talked with a retired professor who showed me the scars left from when Red Guards drove nails into his hands, trying to get him to confess to being a foreign agent. The evidence against this professor? He had studied German literature abroad. Mao’s political opponents were quickly purged as “counterrevolutionaries,” leaving him again as China’s unchallenged leader.

Why does it matter now? After Mao’s death in 1976, Deng Xiaoping led China in a much more moderate direction, and a significant aspect of his rule was acknowledging Mao’s mistakes. The official slogan is that Mao was seventy percent right and thirty percent wrong. However, China continues to wrestle with Mao’s legacy. Mao founded the People’s Republic of China, so to completely repudiate him would be to disavow Communism. The Communist Party is woven too intimately into the very fabric of government to do that. However, there is almost nothing recognizable as “Mao-Zedong-Thought” per se in the actual practices of Chinese society, culture, and economy. Nonetheless, the amount of support for Mao, at least as a symbol, is often surprising to first-time visitors to China. A non-trivial number of young people, who have no first-hand knowledge of the Cultural Revolution, actually seem nostalgic about it. And I have even met intellectuals who were “rusticated” during the Cultural Revolution (sent to do hard labor in the countryside) who feel that China under Mao had a positive moral spirit that is lacking in China today.

I’ll end with an example from popular culture. Famed Chinese director Zhang Yimou’s 2002 film Hero is a historical drama about an assassination attempt against the First Emperor of the Qin Dynasty (221-207 BCE). Western audiences enjoyed Hero for its stunning cinematography and Rashomon-like plot. However, most Western critics failed to grasp why the film was so controversial in China. Chinese audiences know that Mao had compared himself favorably to the First Emperor, who was known for his ruthlessness. When the protagonist of Zhang’s film chooses to let the First Emperor live, the message seems to be that China sometimes needs a ruthless leader to unify it. We see that the behemoth of history always lurks below the surface in China, even in a martial-arts epic. No wonder that Confucius described a true teacher as someone good at “both keeping past teachings alive and understanding the present.”

Bryan W. Van Norden is a professor of philosophy at Vassar College, and the author most recently of Introduction to Classical Chinese Philosophy (Hackett Publishing, 2011). You can follow him on twitter: @BryanVanNorden. This first appeared in June 2015.