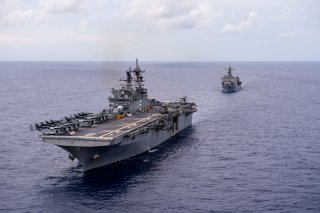 An emboldened China seeks to carve out new spheres of influence, counter Western alliances, and become a major military power. Russia is modernizing its armed forces with advanced weaponry, expanding operations in the Arctic, and operating closer to our shores than ever. While the $715 billion defense budget President Joe Biden released earlier this month begins to address these challenges, one thing is for certain:

Without amphibious warships as a priority in this budget, we run the risk of losing an important strategic dynamic that has guided us through various crises.

Amphibious warships are like no other ship in our inventory. These ships—Wasp-class landing helicopter decks (LHDs), San Antonio-class landing platform/dock (LPDs), and America-class landing helicopter assault (LHAs)—are called the “Swiss Army Knives” of the fleet, and for good reason. They can launch a variety of aircraft, including helicopters, long-range tilt-rotor aircraft, and fifth-generation aircraft like the F-35B fighter. They can carry a full contingent of battle-ready Marines anywhere in the world. Their hospital and trauma facilities, along with their expansive cargo space, water production capabilities, and ability to launch and recover small boats, make them the ideal first responders in humanitarian crises. And their extensive C3I (command, control, communications, and intelligence) suites make them capable of coordinating the actions of other joint, allied and partner assets in a variety of scenarios.

Amphibious warships also possess the perfect capabilities to counter a multitude of threats, specifically in those areas experts call “the gray zones”—places where challengers seek to gain an advantage without provoking a traditional military response. Today’s gray zones are global, found in places like the South China Sea, the Taiwan Strait, the Arabian Gulf, the Black Sea, and the Arctic. There, amphibious warships are proving their value every day through their inherent maneuverability and flexible nature. During a recent expeditionary warfare panel, Rear Adm. Sinclair Harris, former Vice Director of Operations for the Joint Chiefs of Staff and former Commander, U.S. Fourth Fleet, cited specific examples of how amphibious warships are dominating in the gray zone: by defeating terrorists; conducting military training with our allies; navigating counterpiracy operations; and providing humanitarian assistance, including hurricane and tsunami relief.

Gen. David H. Berger, Commandant of the Marine Corps, has referred to the need for a “stand-in force,” one strategically positioned to deter an enemy. Thanks to their capabilities and survivability, amphibious warships are fully capable of providing a true stand-in ability inside hostile weapon engagement zones in addition to their established role as the United States’ primary “9-1-1” crisis response force. That’s why in today’s geopolitical environment, one filled with gray zones and emerging threats, we need amphibious warships—and we need more of them. Recently, the Commandant called for a minimum of thirty amphibious warships, with a national fleet consisting of ten LHDs/LHAs, twenty San Antonio-class LPDs (Flights I and II), and thirty to thirty-five Light Amphibious Warships.

However, there are currently only thirty-two L-class warships in the Navy fleet. Twelve of these ships are Whidbey Island/Harpers Ferry class dock landing ships (LSDs), which are rapidly approaching the end of their service lives. Beginning in FY23, the Navy intends to replace them with LPD-Flight-II ships, beginning with LPD 30, though the current decommissioning schedule is outpacing the rate of new ship construction. The Navy currently also only has seven LHDs, two LHAs, and eleven LPDs, with LPDs 28, 29, 30, and 31 under contract and in construction. Based on Gen. Berger’s recent statements, the Navy will require an additional LHA and five LPDs to meet the demands of the future fight.

For the upcoming fiscal year, the Navy is seeking contracts for LHA 9 and long-lead-time material for LPDs 32 and 33. Historically, the amphibious warship program has been drastically underfunded, taking the backseat to other Navy shipbuilding programs. Recent discussions of implementing a multi-ship procurement strategy in FY22 signal the potential for significant cost savings for the Navy and taxpayers alike. Multi-ship procurement is not a new concept to the Navy—most recently in 2019, Congress approved the two-ship aircraft carrier purchase of CVNs (nuclear aircraft carriers) 80 and 81, and experts predict that this purchase will yield at least $4 billion in savings compared to separate contracts. Not to mention the consistency of orders would ensure stability for the industrial base, which is still recovering after a challenging year due to disruption from the Covid-19 pandemic.

That’s why it’s imperative to move forward with a multi-ship purchase of these amphibious ships, specifically the LPDs, in the spirit of the president’s goal of a lean and efficient defense budget. If a multi-ship buy is approved by the Navy and Congress, it would not only bring down the cost on these ships, but it could speed up the timeline for building more ships that our Navy needs and ensure predictability for the suppliers whose work supports local economies across the country.

The amphibious warship industrial base consists of 750 companies spread out over forty-three states and over 240 Congressional districts. The men and women who make up this team provide critical parts and other materials worth in excess of $1.83 billion. And this production line is “hot”—it’s up and running, keeping thousands of skilled laborers employed at a time when our economy needs it most. It is in our nation’s best interests to ensure that the FY22 Budget keeps these production lines stable and fully funded through a multi-ship buy.

We must do everything we can to ensure these remarkable vessels will be ready to heed the call for years to come. Our nation needs a comprehensive, multitiered strategy to deal with myriad challenges, one capable of adapting to meet changing realities and emerging threats. But it also needs a force structure tailored to handle multiple crises and flashpoints, one equipped with the right assets to tackle any contingency—political, military, or humanitarian.

And in today’s complex environment, there is no better asset than the amphibious warship.

Capt. David Forster (U.S. Navy, Retired) is vice president of business development – sea for Rolls-Royce North America, Inc. He serves as chairman for the Amphibious Warship Industrial Base Coalition (AWIBC), which represents more than 750 businesses in forty-three states that supply parts, equipment and services for the construction and maintenance of U.S. Navy amphibious warships.