War on Autopilot: Russia’s Udar Battlefield Robot and What It Can Do 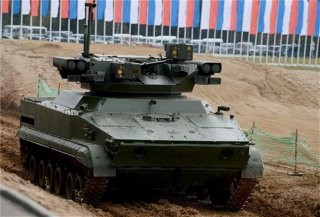 Udar is being developed by the Signal All-Russian Scientific Research Institute, an affiliate to a subsidiary of Russian defense giant Rostec. Earlier this week, Rostec executive Bekkhan Ozdoyev gave a far-reaching interview to the news outlet TASS. Udar is an unmanned fighting vehicle, built from the chassis of the prolific BMP-3 late Soviet infantry fighting vehicle (IFV). Ozdoyev laid out the principles behind the vehicle’s automation, explaining that it is in large part controlled by an extensive suite of sensors located on the lower part of its turret: “When developing the Udar, the enterprise’s specialists tested the possibility of the robot’s movements in the autonomous mode. For this purpose, the vehicle integrates a motion planning subsystem based on sensors and measuring devices,” he said. “Based on the data received, the robot’s route is formed, taking into account terrain features, and combat assignment parameters can be calculated.” Nevertheless, Udar reportedly retains some form of a manual control mode.

Ozdoyev explained that Udar boasts a level of integration with unmanned aerial vehicles, though it is currently unknown exactly which drones are compatible with the vehicle. "We tested inter-operability with drones, including the tethered type with the electric power supply from the robot itself. Such drones can be used for conducting further reconnaissance and relaying the control radio channel,” he said. The manufacturer added that Udar offers “inter-operability with lightweight robots,” which further augments the vehicle with additional reconnaissance, firepower, transportation, and search-and-rescue capabilities. These “lightweight robots” are “mounted on or in the rear of the Udar vehicle and have a mechanism of simplified automatic undocking from the carrier before starting the fulfillment of the assigned task," the manufacturer specified. Udar’s Epohka remote-controlled weapon station is headlined by the standard 30mm 2A42 automatic cannon. The integrated weapons system likewise boasts four Kornet-M guided anti-tank missiles and a 7.62mm PKMT machine gun. Additionally, the Udar unmanned vehicle is packed with a suite of electronic warfare features not found on the baseline BMP-3.

With over 2,000 units built since its introduction in 1987, the BMP-3 platform has seen widespread adoption not only within Russia’s military but also throughout the Middle-East and the post-Soviet sphere. The BMP-3 has spawned over a dozen purpose-built derivatives, including the amphibious BT-3F and anti-tank Kornet-T, but there is little question that Udar is among the IFV’s most unique and technically ambitious variants. An Udar prototype has already been produced, but it is unknown where the machine currently stands in state trials, when it will enter service, and how many serial Udar units will be procured by Russia’s Armed Forces. As Russia’s defense sector invests itself into drone technology on several fronts, including explosive drone swarms and jet fighter companion drones,  it remains to be seen whether or not Udar becomes part of a larger Russian trend of producing unmanned derivatives of well-established military hardware.