A War Begins? How Iran Shot Down a U.S. RQ-4N Surveillance Drone 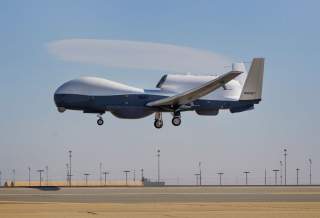 Early in the morning on June 20, 2019, a transporter erector launcher truck near the coastal town of Gerouk, Iran, angled its three missiles heavenward as its boxy phased array radar illuminated a target dozens of miles to the south. Gerouk overlooks one of the narrowest parts of the Straits of Hormuz through which huge oil tankers transiting to and from ports in the Persian Gulf must pass for access to the Indian Ocean.

This RQ-4N, part of the Navy’s VX-20 Test and Evaluation squadron, reportedly took off from Al Dhafra Airbase in the United Arab Emirates at a quarter past midnight, initially remotely piloted by a specialist launch and recovery pilot. It then cruised to its station over the Persian Gulf at roughly 350 miles per hour—two-thirds the speed of a typical airliner—ascending as high as 100,000 feet high into the stratosphere.

From this lofty perch, the huge UAV soared southeast, leisurely circumnavigating the narrow Straits of Hormuz, as plotted here, it sensors scanning everything beneath it. The long-endurance drone could methodically survey up to 2.7 million square miles in twenty-four hours with its powerful multi-function radar, all the while transmitting that data back for analysis.

Periodically, the drone’s operator may have nosed it down to lower altitudes so the sensor operator could scan a ship of interest with its infrared sensor turret, or use its electromagnetic ESM sensors to triangulate the positions of nearby radar transmitters.

At 4:30 AM, as the drone doubled back to the northwest, one of the battery’s three Sayyad-2C missiles rocketed up into the night sky, causing dust to billow around the launcher as the radar-guided weapon accelerated to up to four times the speed of sound. You can see Iranian media footage of the launch here.

Whatever measures were taken did not prove adequate. The Sayyad-2C missile’s fragmentation warhead caught the lumpy drones with its blast, bringing the more than $100 million surveillance system crashing into the Straits of Hormuz. You can see the trail of smoke from the plummeting RQ-4N in this video.

Later, Iran claimed to have recovered wreckage of the highly advanced spy drone at sea. This will be closely studied and likely shared with interested parties in Russia or China.

This account of events is based on the non-conflicting details of the incident shared by U.S. and Iranian sources.

However, one key aspect remains hotly disputed. Iran claims the drone was in “stealth mode”—ie. not emitting signals—and was violating Iranian airspace near Koh-e-Mobarak, fifty-five miles south of Ghoruk when fired upon.

The Pentagon’s Central Command maintains the drone was twenty-one miles away from the Iranian coast, over the Strait of Hormuz.

The Global Hawk is not a stealth drone designed to penetrate hostile airspace like the RQ-170 stealth drone that was hacked and crash-landed in Iran in December 2011. Its modus operandi is to spy on denied areas from a safe distance.

The point is not that the United States is above using drones to violate Iranian airspace—but rather that it would not use such an indiscrete and vulnerable platform as the RQ-4N to do so.

The Iranian Raad (“Thunder”) air defense system is an Iranian copy of the Russian Buk medium-range self-propelled surface-to-air missile system which first appeared in a 2012 parade. The Buk gained international notoriety in 2014 when a system from the Russian Army’s 53rd Air Defense Brigade smuggled into eastern Ukraine shot down Malaysian Airlines flight MH17, killing all 298 onboard.

Curiously, Iran is not known to have openly imported a Buk system, but the Raad appears similar to the Buk-M2EK (NATO codename SA-17 Grizzly) export model, which uses a 6x6 wheeled chassi, though the Buk mounts four missiles and the Ra’ad only three.

The claimed characteristics for the Raad’s Taer missiles are nearly identical to Buk-M1-2’s 9M317 missiles: a maximum target altitude of 82,000 feet, an engagement range of around 31 miles, and a maximum speed of Mach 4.

Iranian media has revealed several different Raad variants distinguished by confusing nomenclature. The most advanced Raad variant is reportedly the Khordad-3, named after the date Iranian forces recaptured the port of Khorramshahr from Iraq in 1982. The Khordad-3 is both a launcher and radar vehicle, and can provide guidance for up to two additional Alam al Hoda transporter erector launchers.

The Khordad-3 can launch Taer-2B missiles, but it also employs a different type called the Sayyad-2C which is actually of American lineage.

The rail-launched Sayyad-2C is claimed to have a range of forty-six miles, a maximum intercept altitude of 100,000 feet, and a maximum speed of Mach 4.5. The higher engagements altitude makes it more plausible for engaging the RQ-4, though the drone was reportedly dipping down for a scan at a lower altitude at the time of the missile launch.

The RQ-4N drone shootdown is the latest in a series of thinly-deniable non-lethal attacks by the Iranian Revolutionary Guard Corps in the Persian Gulf meant to signal Tehran’s growing impatience with renewed U.S. economic sanctions after the Trump administration unilaterally withdrew from the Iranian nuclear deal in 2018.

However, it’s worth noting that several U.S. drones have been shot down in the Middle East without these incidents leading to talk of war, though admittedly most of these episodes were not played up by the Pentagon as the drones were over foreign airspace.

Essentially, the destruction of drones engaged in surveillance activities has not yet been treated as a casus belli. Such murky precedents appear to have motivated Tehran to overtly destroy a valuable U.S. military asset conducting a likely routine surveillance mission over international airspace.

Though Tehran’s provocations may be cleverly calculated, they nonetheless could trigger escalation into a devastating conflict. According to Bloomberg, U.S. forces were on the verge of launching a retaliatory air strike on three Iranian sites that Thursday on the advice of hawkish National Security Advisor John Bolton, only for it to be canceled at the last minute.