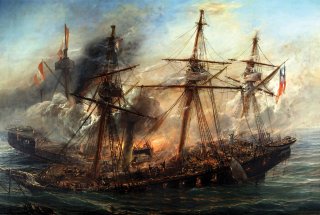 It isn't uncommon for wars to result from territorial disputes. Land has long been a motivating factor in what causes nations to take up arms, but in the annals of military history rarely would powers go to war to control a coastal strip of desert that was filled with guano – bird droppings. Yet, from 1879-83 that's exactly what lead Chile, Bolivia and Peru into one of South America's most deadly wars of the 19th century.

The War of the Pacific as it is typically known, involved disputes between Bolivia and Chile over control of the part of the Atacama Desert between the 23rd and 25th parallels along the Pacific coast. While the land could rightfully be described as scenic, it was home to massive amounts of birds, which left behind the aforementioned droppings. It wouldn't seem like that would be a very desirable commodity, but it turned out that it made a good fertilizer but could also be used in the production of gun powder.

The Pacific War wasn't even the first conflict fought to control the supply of guano. In 1864, Spain – which had lost much of its once vast colonial empire – attempted to seize the valuable Chincha Islands off the coast of Peru. This occurred while the United States was still occupied with the Civil War and couldn't enforce the Monroe Doctrine. The islands supplied over half of Peru's annual budget – as laborers collected bird guano from 150-foot-high deposits – so the South American former colony of Spain wasn't about to let it go without a fight.

In a rare case of unity, Chile actually refused to allow the Spanish to refuel in its ports. The Spanish sailed in any way, demanded reparations payments, and ended up instead at war with Chile. Peru joined on the side of Chile, and eventually, Ecuador and Bolivia joined in the fight in 1866. While Spain was able to shell a Chilean city and crippled the South American nation's merchant marine, the world opinion was against Spain. It withdrew and Peru regained control of its islands in 1867.

Just over a decade later another and more vicious war broke out for guano, as well as the valuable mineral deposits in the Atacama Desert, notably sodium nitrate.

Given that it was a desert without much in the way of settlements the national borders in the region hadn't been definitively established, but Chile and Bolivia agreed to recognize the 24th parallel as the boundary, while Chile was able to share the export taxes on the mineral resources of Bolivia's territory between the 23rd and 24th parallels. Bolivia, which had only a narrow corridor to the sea, had been dissatisfied by this turn of events.

Matters were made worse when in 1876 Hilarión Daza Groselle seized power in Bolivia as military "caudillo." He styled himself as a South American Napoleon, but he proved more inept than Louis Napoleon III, who had recently led France into a disastrous war with Prussia that resulted in the unification of Germany. Daza's actions would prove even more disastrous for Bolivia.

The Bolivian Congress retracted the Chilean concessions in 1879 and declared war on Chile. In addition, Bolivia had secretly signed a mutual defense agreement with Peru, which joined the Bolivian cause. The war seemed to go well at first for the Bolivians and Peruvians when the Chilean warship Esmeralda was sunk, but the tide quickly turned.

The Peruvian ironclad Huáscar was captured, while the combined Peruvian-Bolivian forces on land were defeated. Peru's capital of Lima felt to the Chileans, and while Peruvian irregulars sustained a guerilla war in the mountains the fighting was for a lost cause. Peru was forced to cede its province of Tacama, including the port city of Arica. Bolivia gave up all its territory between the Andes and the Pacific and has been a land-locked nation ever since.

In 1904 when a treaty permanently made the land part of Chile – along with its deposits of nitrate, copper and other minerals – but Chile agreed to build a railroad to connect the Bolivian capital of La Paz with Arica and guaranteed freedom of commerce through Chilean ports and territory. Bolivia later went to war with Paraguay to gain access to the river system that would give it access to the Atlantic coast, but that was just another disastrous war for the nation.