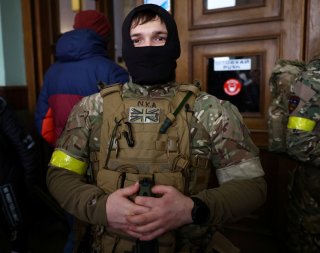 Throughout history, wars have often been fought by "volunteers" from far-off lands. Much of the time, the motivator was money rather than ideology, but during the Spanish Civil War, thousands of volunteers headed off to support each side because they believed deeply in the cause. Some 35,000 anti-fascists poured into Spain from fifty-two countries to join the Republicans and take up arms against the Nationalists.

Fewer actual volunteers fought for the Nationalists, but upwards of 1,000 individuals came from across Europe. In addition, thousands more German and Italian personnel were essentially sent by their governments to aid the Nationalist forces.

Now, nearly ninety years after the Spanish Civil War nearly destroyed that nation, Ukraine is battling for its very existence and independence. While average citizens are now working to fortify Ukraine's cities and are arming themselves with antiquated weapons and homemade Molotov cocktails, others are rallying from around the world to help defend the nation.

Ukraine has announced that upwards of 20,000 foreigners have volunteered to fight the Russian invaders. That has included former members of the British Army's elite paratrooper regiment, a Canadian sniper, and countless others from across the world.

So many have come to defend Ukraine that Russian president Vladimir Putin, who orchestrated the invasion under the pretext of it being a "special military operation" meant to cleanse the country of Nazis, suggested that the "Western sponsors of Ukraine" had simply sent over the fighters.

Some nations, such as Canada and Germany, have cleared the way for their respective citizens to join the fight, while the United States is still actively discouraging citizens to take up arms. The British government has even warned that would-be volunteers to the Ukrainian Foreign Legion could be violating domestic anti-terrorism laws.

Russia has announced that it may have killed upwards of 180 foreign fighters when it targeted a Ukrainian military base in Yavoriv, twelve miles from the border with Poland.

"The destruction of foreign mercenaries who arrived on the territory of Ukraine will continue," Russian Defense Ministry representative Major General Igor Konashenko said in a statement. Konashenko added that the base was targeted by "long-range, high-precision" weapons because it was hosting the foreign volunteers and had a large stockpile of foreign weapons.

Ukraine countered that thirty people had been killed, while another 134 were wounded when the base fell early Sunday morning. Many of the foreign recruits had reportedly been sleeping when the airstrike occurred.

Moscow has warned repeatedly that foreign fighters would not be treated as lawful combatants.

"I wish to make an official statement that none of the mercenaries the West is sending to Ukraine to fight for the nationalist regime in Kyiv can be considered as combatants in accordance with international humanitarian law or enjoy the status of prisoners of war," Konashenkov said on March 4, according to Russian media outlet TASS. "At best, they can expect to be prosecuted as criminals. We are urging all foreign citizens who may have plans to go and fight for Kyiv’s nationalist regime to think a dozen times before getting on the way."

Despite its stance on those supporting the government of Ukraine, Moscow has also said it would welcome volunteers. Last week, Putin backed a call to allow volunteers, including those from abroad, to help pro-Moscow separatists fighting in Ukraine's Donbas region.

According to Russian defense minister Sergei Shoigu, more than 16,000 people—mostly from the Middle East—have already applied to join the fighting. U.S. officials have warned that those could include many Syrians skilled in urban combat.

Russia has continued to back the government and forces of Syrian president Bashar al-Assad, and the Middle Eastern country hosts Russia's only foreign military base outside of the former Soviet Union. However, Russia is reported to be building bases in the Central African Republic, Egypt, Eritrea, Madagascar, Mozambique, and Sudan.

All of those locations could allow Russia to recruit additional "volunteers" for its conflicts in Europe and Asia.