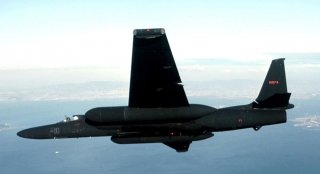 When a U-2 spy plane can pass target details to an F-22 fighter jet, an F-35 fighter jet, and ground control center all at once, in near real-time, amid heavy multi-domain combat, the speed and operational efficiency of warfare attack change dramatically.

Achieving this kind of “warfare at speed” was the intent, and the apparent result of a recent test conducted by the Missile Defense Agency and Air Force with Lockheed Martin’s Skunk Works division. Operating at high altitudes, a U-2 spy plane sent data concurrently to five F-35 jets, one F-22 jet, and a ground control station concurrently using a specially configured “gateway” payload built into the U-2 Dragon Lady. The test, which is reported to have yielded promising results, was part of Skunk Works’ ongoing Project Hydra program.

While the impact of this kind of expedited attack possibility is both defining and clear in many respects, some of the technical nuances which bring this to fruition are a bit more nuanced and complex. The U-2 payload, called the Open System Gateway, is engineered with technical infrastructure sufficient to enable connectivity between otherwise disparate communications systems such as the F-22 jet’s Intra-Flight Data Link, F-35 jet’s Multifunction Advanced Datalink, Link-16, and a datalink called Tactical Targeting Network Terminal.

“The Project Hydra effort also marked the first time F-35 sensor data was delivered to an operational ground system over a Tactical Targeting Network Terminal (TTNT) link using an airborne gateway,” according to a Skunk Works statement on the test. The demonstration connected a Common Missile Control Center with the Shadow Operations Center at Nellis Air Force Base to view the sensor data for “operational command and control of highly capable air assets,” according to the statement.

One of the communications avenues made possible through this kind of technical infrastructure gateway is secure two-way connectivity between F-35 jets and F-22 jets which preserves stealth mode. This means it is less hackable and emits a much less detectable electronic signature. Northrop Grumman is now testing what developers called a “radio translator” engineered to connect an F-22 datalink Interflight Datalink with the F-35’s datalink Multi-Function Advanced Datalink.

“We are working on a demonstrator using a radio as a translator to convert data sent from an F-35 to an F-22 in a stealthy manner. It involves using software-defined radio hardware and software and antennas,” Colin Phan, the director of Strategy and Tech Communications for Northrop Grumman, told the National Interest last year.

Stealth mode is preserved by a Northrop Grumman anti-jam integrated software-defined radio device called Freedom 550. Software programmable radio works by sending IP packets of data through waveforms to transmit combat-relevant information. Phan explained that there can be one multi-function box that does as many as twenty-five different functions. Stealth mode is sustained, Phan explained, by using a smaller number of modules to connect the two data links together through a converter. Fewer modules help preserve stealthy communications by virtue of decreasing the emissions of an omnidirectional antenna, which is more detectable. The broader the signal and the wider the emission, the larger the electronic signature, something which can of course present a risk of being detected.