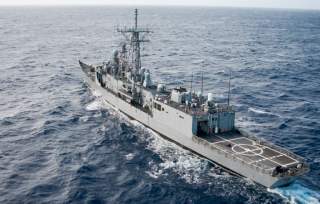 The U.S. Navy wants to acquire a new large surface combatant (LSC). The question is why? Ostensibly, the LSC will replace the aging Ticonderoga-class cruisers and possibly supersede the Arleigh Burke DDG-51 destroyers. It is supposed to be larger than the Arleigh Burkes but deploy many of the same systems, have lots of room for future growth and be capable of incorporating new capabilities such as large missiles, autonomous platforms and directed-energy weapons when they are developed. Considering that the Navy already has a massive fleet-building program underway and is just beginning to deploy the advanced Flight III variant of the Arleigh Burke DDG, is this the right time to chase after a new large surface combatant?

The U.S. Navy has gone on a building spree in a full court press to expand the size of the Fleet and add to its overall combat capabilities. It has already ordered the next two Ford-class carriers. It is on track to produce a new generation of ballistic missile submarines, the Columbia-class. The Navy is preparing to award a contract to build the heavily-armed Future Frigate starting in 2020 and it just announced that it wants to sign a contract to acquire a medium unmanned surface vessel this year. According to the Chief of Naval Operations’ (CNO) Design for Maintaining Maritime Superiority, the current plan is to award contracts for the LCS, the Large Unmanned Surface Vehicle and the Future Large and Small Auxiliaries in 2023. This official document declares that all of these must be delivered as soon as possible.

The Ticonderoga-class was built primarily to protect carrier battle groups from the growing threat posed by long-range Russian aircraft armed with standoff missiles. It was fortunate that as the threat emerged, the Ticonderogas were equipped with several systems that were at the time state-of-the-art, including the AN/SPY-1 radar, Standard missiles and the Aegis Combat System. Yes, these ships also had the ability to launch anti-ship and land-attack missiles and to conduct anti-submarine warfare, but their central purpose was fleet air (and later missile) defense.

Now the brunt of the Navy’s air and missile defense mission is being carried by the Fleet’s current sixty-six DDG-51s with more to come. The majority of these have or will be refitted with improved electronics and newer versions of the Aegis Combat System to permit them to operate in the ballistic missile defense mode. An improved version of the DDG-51, the Flight III, is now being built. It will have the more capable Air and Missile Defense Radar (AN/SPY-6), as well as upgrades to other electronic and battle command systems and the addition of new weapons. All the Arleigh Burkes are multi-mission ships capable of conducting long-range missile strikes as well as anti-surface and anti-submarine warfare.

At one time, the Navy believed that the Arleigh Burke could serve as the platform for the continuing introduction of new and improved capabilities well into the twenty-first century. Improvements in computers and electronic systems, radar modules and generators all allowed more capability to be packed into the Arleigh Burkes with a minimal increase in weight. In 2015, there was a plan to install a hybrid electric drive in future DDG-51s. This would have substantially increased their power generation capability and served as the basis for supporting directed energy weapons.

So why does the Navy want to buy the LSC which will employ, at least initially, many of the systems deployed on the DDG-51 but could cost almost twice as much? If one reviews the initial Request for Information (RFI) sent out to industry, it seems the answer is that the Navy wants a bigger ship so it can hold bigger stuff. There is a call for new vertical launch systems that could accommodate unspecified longer and larger missiles. The LSC is said to need increased space, weight, power and cooling in order to support futuristic high-demand electric weapons, sensors and computing systems. Then there is the all-important requirement to carry an embarked warfare commander and staff.

Navy leadership is even less clear than the RFI with respect to what it wants in the LSC. The CNO has talked about excess power generating capacity and the ability to rapidly switch out systems. The Director of N96, Rear Adm. Ron Boxall, has been a little clearer than his boss regarding what the Navy wants in an LSC: “You need something that can host the [size, weight, power and cooling], so it’s probably going to be a little bigger. Flexibility and adaptability, the ability to upgrade quickly, is going to be a key requirement capability. It’s got to have room to grow.” Boxall also spoke of the need to house an as-yet undefined larger, longer missile.

Other observers have suggested additional capabilities they would like to see on the LSC. A lot of attention has been paid to deploying railguns and directed-energy weapons, although interest in the former has waned significantly in recent months. Some experts see the new ship also as a carrier for a mix of aerial and sea-based drones.

It all seems a bit fuzzy. How big a ship to carry how many new missiles and generate what amount of power in support of which futuristic weapons? What new drones are likely to be available for deployment on the LSC? Even less clear is the role of the LSC in an evolving Fleet. The carrier battle groups will be well protected by the Arleigh Burkes backed up by the upgunned Future Frigate. With the Air Force, Marine Corps and even Army looking to invest in long-range strike capabilities, does the Navy really need a new bigger and badder missile and is one in development that would be available when the LSC goes to sea? It seems the Navy sees itself in a race with China to be the first to deploy cool new technologies whether they are practical or not. The LSC seems like the repository for the unrealized and, possibly, unrealizable dreams of Navy planners and laboratory scientists.

In an era when the Navy is looking to create a distributed force of sensors and shooters, relying increasingly on unmanned platforms and aerial drones, does it make sense to invest scarce resources in a relatively small number of large surface targets? For the cost of an LSC, the Navy can buy both a DDG-51 Flight III and a Future Frigate. If the desire is still to get to a fleet of 355 ships, this would seem to be a better path.