Was a Russian MiG-29 Fighter Shot Down in Libya? 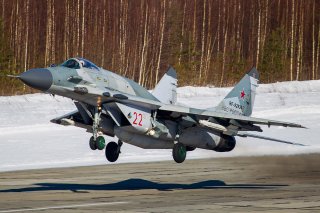 A video that was widely shared on social media last week reportedly showed a Russian-speaking pilot being picked up by a Mi-24 Hind gunship helicopter in Libya. Numerous reports suggest the pilot was a private contractor and that his MiG-29 fighter aircraft was shot down. The short clip shows his white-and-orange parachute on the ground, along with other equipment, including a Soviet-era style flight helmet.

While the video, which emerged online on Sept. 7, doesn't actually show a MiG-29 Fulcrum being shot down, it has been widely reported that the aircraft – flown by Russian contractors – have been operating in support of rouge Libyan General Khalifa Haftar, commander of the Libya National Army (LNA) in recent months.

The MiG-29 Fulcrum was the first fourth-generation jet fighter produced by the Soviet Union, but it featured third generation hardware including its electronics as a way to keep costs down for export sales to developing countries. However, it has been described as having a sleek and deadly appearance in contrast to earlier Soviet-era fighters, and could outturn most NATO fighters.

With the fall of the Soviet Union, the MiG-29 was widely sold throughout the world with such nations as Iran acquiring the aircraft despite ongoing sanctions. To keep potential adversaries like Iran and even North Korea from obtaining the fourth-generation fighter, the United States even purchased 21 of the MiG-29 fighter jets from Moldova. Fourteen of those were the later-model MiG-29Cs. Moldova received $40 million in humanitarian assistance, some army trucks and other non-lethal equipment.

The U.S. efforts to keep rouge states from buying the fighter was largely unsuccessful and it has remained one of the world's most prolific fighter jets, and is the fifth most common combat aircraft in the world, which is why it isn't surprising that one could have been shot down in Libya.

If so it wouldn't speak well of Russian military hardware, and it comes months after a T-14 Armata tank was apparently destroyed by insurgents in Syria.

But was a MiG Shot Down?

In the recently released video, there is also no visible wreckage of any aircraft, but the pilot can be heard saying – in Russian – that he ejected from his fighter. It also shows the approaching Hind helicopter. For those reasons it has also been suggested that the footage could be from a combat search and rescue exercise.

The M-24 Hind that reportedly recovered the pilot appeared to be operated by the Libya National Air Force, which lends credence to this being an actual rescue operation and not a drill. The M-24 is a Cold War era rotary aircraft that can be used as an attack helicopter or low-capacity troop transport. Often called a "flying tank," the M-24 has been used in dozens of conflicts by numerous operators since it entered service in the early 1970s. The United States military has owned and operated Hinds since the early 1990s where the helicopters are used in military exercises.