Was This Ukrainian Tank Spotted at the U.S. Army's Yuma Proving Ground? 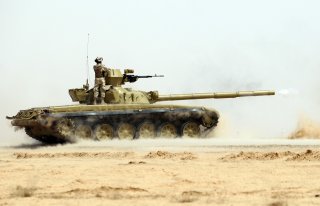 Earlier this week a satellite image made the rounds on several military forums and it shows what was believed to be Soviet-era T-72 main battle tanks (MBT) at the U.S. Army Yuma Proving Ground (YPG), which is on the largest military installation in the world.

While the Russian military still uses the T-72, which was first deployed when Richard Nixon was President and the F-4 Phantom was America's primary fighter, the fact that YPG had the Cold War era tanks isn't surprising. The YPG serves as part of the U.S. Army Test and Evaluation Command and is a multiple purpose test facility for U.S. military equipment, but like most proving grounds it is used to understand how foreign hardware stands up as well.

Obtaining a T-72 isn't all that hard, and as a 2015 Wired magazine story noted, the tanks may have been "a million bucks new" but used tanks were only as expensive as a luxury automobile. That's because the T-72 had been in service with the various Warsaw Pact powers including Czechoslovakia, Hungary and Poland. In the post-Cold War era the Czech Republic, Slovakia, Hungary and Poland were more than happy to sell off that vintage hardware, and sell it cheap.

There are also other more shadowy or nefarious ways to acquire military hardware, as Dave Majumdar wrote in The National Interest: The U.S. government has procedures to allow for the export of such items—including high-grade military hardware.

So that explains those tanks, yet, as reported by Defense-Blog, Damian Ratka, a military expert from Nowa Technika Wojskowa, spotted and identified a Ukrainian T-80U, which he suggested may have been one of four T-80UD/T-84 tanks that the United States purchased from Ukraine in 2003. Those tanks had been reportedly sent to the U.S. Army Aberdeen Test Center.

About 500 of the T-80UD tanks were built at the Malyshev plant in Kharkiv, from about 1987 to 1999 and it was a variation of the Soviet-designed T-80U, fitted with a diesel engine in place of the high-performance gas turbine engine. The Ukrainian version, which was one of several variations that were being trailed with advanced equipment and Active Protection Systems (APS), at the time of the dissolution of the Soviet Union.

So far the eagle-eyed Majumdar was only able to spot a single one of the four tanks believed to have been purchased by the United States, and exactly what testing it is undergoing at YPG is unclear. Aberdeen's Churchville Test Area has been widely used due to hills that offer steep, natural grades, while Yuma offers a desert environment along with hundreds of miles of road courses.

Perhaps more of the Ukrainian "imports" will show up – but so far Majumdar's sighting remains the only one to even suggest where those advanced T-80U tanks could be.