This Was the U.S. Navy's Very First Battleship 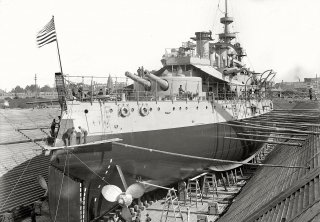 The USS Oregon was the third ship of the Indiana class, the first true battleships constructed by the United States Navy (USN). Oregon was the second warship of the name to serve in the USN (the first was a brig that played primarily an exploratory role), although CSS Oregon was a blockade runner and river gunboat for the Confederate Navy during the Civil War.

In the 1890s and 1900s, the U.S. Navy used state names for both battleships and armored cruisers. Although the differences would grow larger in the 20th century, at the time the two ship types were roughly the same size, with battleships carrying a heavier armament at the expense of speed. Only in 1912 were the surviving armored cruisers of the USN (the Pennsylvania and Tennessee classes) renamed after cities, in order to free up state names.

Oregon was laid down in 1891, immediately in the wake of the publication of the first volume of Alfred Thayer Mahan’s Influence of Seapower Upon History. Oregon and her sisters were designed primarily for coastal defense work but carried a main armament comparable with the most advanced foreign battleships.

Completed in July 1986, Oregon displaced 10,300 tons, carrying a main armament of four 13” guns (weapons with an effective range of perhaps twelve thousand yards) in two twin turrets and a secondary armament of eight 8” guns in four twin turrets. She could make 15 knots with a range of 5,600 miles.

Although a reasonable effort for a navy unused to constructing line of battleships, Oregon and her sisters did not compare favorably with foreign counterparts, the cream of which were represented by the British Royal Sovereign class. The Royal Sovereigns were 3,000 tons larger, carried 13.5″ guns, and could make a knot and half faster than Oregon.

Nevertheless, Oregon represented a start, and the U.S. Navy would, with the help of Mahan and several committed Presidential administrations, follow through with the creation of one of the world’s most powerful navies.

Built in San Francisco, Oregon was commissioned in 1896 and immediately deployed to the Pacific. The Pacific Squadron was expected to support the Asiatic Squadron, which secured U.S. interests in China and the rest of the Far East.

On February 15, 1898, in the context of increasing tensions between Spain and the United States over Spanish control of Cuba, the armored cruiser Maine blew up in Havana. Thanks in part to the advocacy of William Randolph Hearst’s network of newspapers, the United States went to war with Spain in April.

Oregon was not designed to withstand the rigors of a rapid trip around South America. Still, Captain Charles Edgar Clark, who had only taken command of Oregon a few weeks before, opted to take the treacherous Straits of Magellan to save time.

This placed the battleship in serious jeopardy when a major gale struck, forcing Oregon to anchor in uncertain conditions. Nevertheless, Oregon survived and arrived in the Cuba theater of operations on May 24.

Now nicknamed “McKinley’s Bulldog,” the Oregon participated in several actions against Spanish positions in Cuba before the war ended, including the Battle of Santiago de Cuba, which destroyed the bulk of the Armada Espana.

The story of Oregon’s experience circling South America was critical in building support for the construction of the Panama Canal, as the existence of a canal would have cut three weeks off the travel time. Consequently, the United States fomented a rebellion in Colombia that led to the independence of Panama and purchased French equipment and property in what came to be known as the Canal Zone.

Oregon was redeployed to the Pacific after the war, and spent considerable time in East Asia, including duty on station during the Boxer Rebellion. An uncharted rock nearly sent her to the bottom in 1900; she remained stuck for five days but was eventually freed and repaired in Kure, Japan.

In the final stages of World War I, she escorted troop transports carrying forces participating in the Siberian Intervention against the Bolshevik Regime. In 1923, Oregon was demilitarized and loaned to the state of Oregon as a floating museum. She was moored in the Willamette River for what was expected to be a permanent stay in Portland.

However, World War II intervened, and the USN decided that Oregon was more useful as scrap metal than as a war monument. No less than Representative Lyndon Baines Johnson delivered the keynote upon her sale to a local scrapyard.

Then the story took a strange turn. The Navy determined that it didn’t actually need the scrap, and the process was halted after Oregon’s guns and superstructure had been removed. The hulk was reclassified and used as a munitions ship in the Pacific campaign.

Moored in Guam after the war, her hulk broke free during a storm in 1948 and floated about the Pacific for a month. In 1956, Oregon met her end as she was sold for scrap to a Japanese shipyard.

Oregon’s foremast survives today in Tom McCall Waterfront Park in Portland, Oregon. There’s no question that USS Oregon would have better served the long-term interests of the United States Navy as a memorial in Portland than as scrap, especially given that most of the ship ended up in Japan.

Had she survived, Oregon would have been the last representative not only of the early USN, but also of an era of battleship architecture. Oregon went from construction and commissioning to decommissioning and obsolescence in a mere ten years. At twenty, she was an archaic relic.  By comparison, we now expect Nimitz and Ford-class aircraft carriers to serve as front line units for fifty or sixty years.