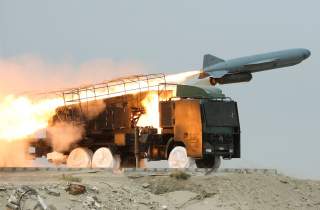 How would Iran respond to an Israeli air strike on its nuclear facilities? In a less than subtle message to Israel, Iranian TV has broadcast a documentary that shows simulated missiles pounding Tel Aviv in retaliation for an Israeli attack.

(This article by Michael Peck originally appeared at War is Boring in 2013.)

The video excerpt begins with an Iranian missile in a silo, then shifts to what looks like a battery of mobile launchers raising missiles into launch position. As stirring music plays in the background, missile after missile roars into the sky. The video moves to an orbital views as the missiles soar into space, then shows the coastline of Israel, then the Tel Aviv skyline.

An Israeli anti-missile battery—I’m not sure if it’s supposed to be Patriot or Arrow, but I’m guessing Patriot—opens fire, destroying several incoming rockets. But other Iranian missiles penetrate Israeli defenses as explosions erupt all over Tel Aviv … accompanied by what sounds like car alarms going off.

Missile crosshairs appear over Google Earth imagery of Israeli sites. The captions, which now change from Farsi to English, describe them as Ben Gurion airport, the Tzifin military base, the International Bank of Israel and the Dimona nuclear reactor. The simulation shows a map of Tel Aviv with 15 impact sites marked in bright orange.

The video excerpt then shows real footage of Israeli soldiers scurrying around destroyed vehicles—and ends with sheet-covered bodies lying on the ground.

So what we can conclude from this, other than Iran has successfully mastered the ability to use Google Earth and to create computer graphics that look the 1993 video game Doom? It’s interesting that the missiles in the video appear to be solid-fueled weapons like the Sejjil, instead of liquid-fueled rockets like the Shahab, which take longer to launch and thus are easier to destroy.

Beginning the video with a Sejjil in a hardened silo also seems to be a message that the Israeli air force cannot destroy Iran’s missile capability. The depiction of Israeli missile defenses destroying some — but not most — incoming missiles seems designed to rattle Jerusalem’s confidence in its anti-missile shield.

The concluding imagery of Israeli corpses needs no explanation.

Given the tit-for-tat nature of the Middle East conflict, a retaliatory Israeli video should be coming soon.