Watch Out China: India and Japan Are Teaming Up for Joint Exercises 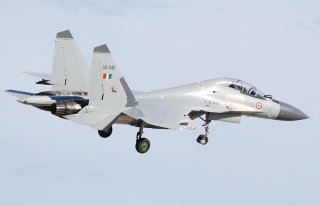 It was announced this week that India will be sending its Su-30 Flanker fighter jets to Japan for a series of joint exercises with the Japan Air Self-Defense Force (JASDF.)

The report came from Japan’s Sankei Shimbun newspaper, as relayed by the Drive, which added that the exercise was originally scheduled for 2020 but was pushed back more than once due to the coronavirus pandemic. Plans have been in place for the exercises going back to 2018, the Drive report said.

“But the [Japan] Air Self-Defense Force and the Indian Air Force have agreed that they would like to realize it by the end of the year in view of the threat of China,” the newspaper said, per the Drive.

The exercise will follow similar ones that India has carried out with the United States and Britain. Experts spoke of the significance of the upcoming exercises.

“The value for Japan of being able to train with Indian Su-30s could be significant,” Corey Wallace, of Japan’s Kanagawa University, told the War Zone. “The JASDF can look forward to enhancing its pilots’ understanding of the Su-30’s maneuverability, cruising range, fuel consumption, and turnaround times for maintenance, which could be vital for planning during a protracted conflict… This is very clear diplomatic signaling from two Quad partners whose relationship has promised much but has underdelivered up until now.”

“India well understands that its greatest leverage against China is the prospect of joining in combinations with like-minded partners like Japan,” Arzan Tarapore, a South Asian studies scholar at Stanford University, also told the War Zone. “This threat of coalition-building, rather than anything that India does alone, is what scares Beijing the most.”

Back in 2019, Konstantin Makienko wrote in the National Interest about India’s plans to upgrade its Su-30MKI fighters.

“The Indian Air Force (IAF) has so far placed orders for 272 aircraft, of which 50 were delivered by Russia in 2002-2004 and 2007,” Makienko wrote at the time. “Another 222 are to be supplied by the HAL Corporation; production under Russian license began at HAL’s Indian facilities in 2004. So far, more than 200 planes have already been delivered, and the Su-30MKI is the most numerous of the multirole fighters currently in service with the IAF.”

And in August of last year, Kris Osborn wrote about a ten-hour patrol of the South China Sea, which was completed by one of China’s Su-30 fighter jets.

“Fighter jets deployed on the islands can react faster, but that maintenance on the islands is more difficult due to high salinity and humidity, and the number of fighter jets would be limited since island bases are relatively small,” a Chinese aviation expert told the Global Times.