Watch Out! Russian Submarines Are Prowling Off the U.S. Coast 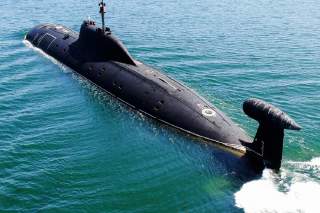 The number of Russian submarines sailing in distant waters increased by half between the summers of 2018 and 2019, one U.S. general warned.

The spike in Russian sub activity is consistent with recent trends in the Kremlin’s naval deployments.

But don’t count on it lasting. The Russian fleet like many advanced navies is losing old submarines faster than it can acquire new ones.

American forces observed a “50-percent increase in the number of resources in the undersea that Russia committed" to long-range submarine patrols, U.S. Air Force general Tod Wolters, the head of the Pentagon’s European Command, told U.S. senators on Feb. 25, 2020.

The high pace of deployments continued through the fall of 2019. The Russian navy in mid-October of that year sortied eight submarines in the country’s biggest undersea exercise since the Cold War.

The U.S. fleet in total operates more than 50 submarines split between the Pacific and Atlantic Fleets. This number is shrinking.

The surge in Russian sub-activity was evident as early as 2018. “We're talking about more (activity) than we've seen in 25 years,” U.S. Navy admiral John Richardson, then the chief of naval operations, warned in August 2018.

In July 2018 the Pentagon re-established its 2nd Fleet to oversea combat operations off the U.S. East Coast. The fleet had been idle since 2011.

The East Coast no longer is a “safe haven” for American warships, U.S. Navy vice admiral Andrew Lewis, the 2nd Fleet commander, said at an industry event in early February 2020.

"We have seen an ever-increasing number of Russian submarines deployed in the Atlantic, and these submarines are more capable than ever, deploying for longer periods of time, with more lethal weapons systems,” Lewis said.

"Our new reality is that when our sailors toss the lines over and set sail, they can expect to be operating in a contested space once they leave Norfolk," Lewis added. "Our ships can no longer expect to operate in a safe haven on the East Coast or merely cross the Atlantic unhindered to operate in another location."

But the Kremlin probably cannot sustain its current high volume of undersea operations.

The Russian navy’s submarine force, arguably the fleet’s most important component, is about to shrink. Potentially a lot.

Most of the front-line submarines date from the 1980s and ‘90s. “There are still quite a few old, Soviet-era vessels carrying a major part of the burden, both attack submarines and ballistic-missile boats,” Iain Ballantyne, editor of Warships International Fleet Review, told The National Interest. “For how much longer such elderly vessels can be sent to sea while waiting for more new ones to enter service is debatable.”

By the late 2020s or early 2030s, the Russian navy could lose all but 12 of its existing subs. If Moscow succeeds in producing all the new submarines it currently plans to acquire, the total undersea fleet could top out at just 28 boats. Half its current strength.

“There will come a time when a whole swathe of the Russian submarine force both in the Northern Fleet and the Pacific Fleet – the most important naval formations -- will no longer be operational, leaving huge gaps,” Ballantyne said.