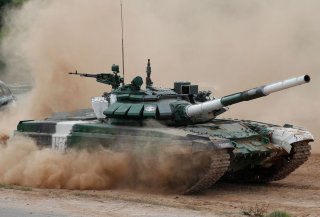 The Russian Black Sea Fleet has conducted a number of exercises in recent months, including live-fire drills against simulated targets, anti-submarine maneuvers and even sole and joint artillery and missile firings against naval, coastal and air targets. Last week Russian state media announced that the Black Sea Fleet’s tank troops would begin a gunnery exercise on the Crimean Peninsula using upgraded T-72B3 tanks.

“As part of scheduled combat training measures for coastal defense units of the Black Sea Fleet’s army corps, the crews of T-72B3 tanks have started to accomplish assignments within tank companies while the crews of BTR-82 armored personnel carriers continue practicing individual operations in conducting a battle,” the press office said in a statement, as reported by Tass.

During the drills, the crews of the T-72B3 tanks and BTR-82 armored personnel carriers (APCs) will take part in exercises that include live fire against simulated targets. This includes potential enemy armor, artillery and anti-tank squads. In addition, the armored crews will practice offensive and defensive operations on different terrain and will negotiate various natural and artificial obstacles.

“These measures are a mandatory element of training combat vehicles’ crews and are running at a different time of day and night at combat training ranges on the territory of the Crimean Peninsula,” the Fleet’s press office added.

The T-72B3 is the latest upgraded version of the Soviet-designed T-72, which first entered service in 1971. These improved tanks include new engines, better fire control and a more powerful cannon. The BTR-82A is convention APC that offers higher mobility and protection for ground troops as well as a degree of fire support for infantry.

The fact that the Black Sea Fleet even has tanks and armored personnel carriers should not be surprising.

The Russian Naval Infantry (MPR) has operated as the amphibious force of the Russian Navy for more than three centuries. The first Russian naval infantry force was formed in 1705, and it has been taken part in the Napoleonic Wars, the Crimean War, the Russo-Japanese War and both World Wars.

Naval Infantry contributed to the defense of Leningrad, Moscow, Sevastopol and notably Stalingrad during the Second World War—known to the Russians as the Great Patriotic War. However, it generally was used as regular infantry without any amphibious training. The Naval Infantry was disbanded after World War II, while some units were transferred to the Coastal Defense Force—but it was reformed in 1961 as a combat arm of the Soviet Navy.

While similar in mission to the United States Marine Corps, the Russian Naval Infantry is a much smaller force—numbering just 12,000-men, which makes it the 10th largest Marine Corps in the world. One naval infantry regiment is attached to each of the major fleets.