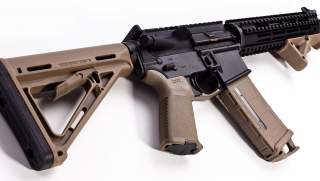 A YouTube video by Demolition Ranch shows just how many rounds it takes to cut a telephone pole in half. It takes a lot.

There are some questions that plague people their entire lives: Why are we here? What’s our purpose? What’s actually at the center of a Tootsie Pop? And, just how many rounds does it take to blast a telephone pole in half?

Alright, not everyone wonders about that last one, but Matt Carriker of the YouTube comedy and firearm channel, Demolition Ranch does, and fortunately for us, he decided to find out.

In the seven-minute long video, Carriker unloads on a telephone pole with an AR-15 from Patriot Ordnance Factory that fires 7.62, the same caliber ammunition as an AK-47.

The video breaks partway through because Carriker was called away to tend to an injured kitten, really. In addition to running a popular firearm and humor channel, Carriker is also a veterinarian and hosts another show called Vet Ranch, where he and his team take in and treat sick animals.

Coming back the next day, Carriker fires several more magazines and on the fifth, he successfully cuts the massive log in two.

There are definitely more efficient ways to cut a chunk of wood in half, but if you’re bored and have a surplus of ammo, going Rambo on a large log like a gun-toting lumberjack does look like fun.

Check out the YouTube video by Demolition Ranch and see for yourself.