Watch a Russian and an American Warship Nearly Collide 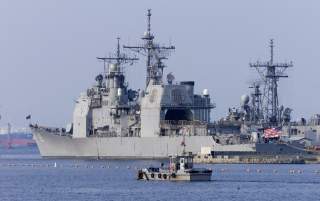 The U.S. Navy’s guided-missile destroyer USS Chancellorsville was forced to take evasive maneuvers in the Pacific after it was nearly struck a Russian destroyer.

While both sides are blaming each other, the Russians are well-known for playing chicken with enemy ships and aircraft.  In fact, earlier this week a Russian jet forced a USAF plane to break off its flight plan to avoid a collision over the Mediterranean Sea.

The Chancellorsville was able to get away without damage.

“A Russian destroyer…made an unsafe maneuver against USS Chancellorsville, closing to 50-100 feet, putting the safety of her crew and ship at risk,” US Navy spokesman Cmdr. Clayton Doss told CNN in a statement.

The American warship was traveling in a straight line when the incident occurred, and video captured from the Chancellorsville shows the Russian Admiral Vinogradov speeding up alongside the U.S. vessel, nearly smacking into it.

Such bullying posture is not uncommon for Russian Naval forces, who regularly harass U.S. vessels in the Black Sea.

The incident occurred in the international waters of the Philippine Sea, though the Russians claimed it took place in the East China Sea.

International maritime law requires ships to maintain a safe distance of 1,000 yards when passing another.