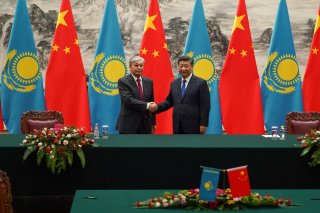 The recent unrest in Kazakhstan quickly led to an intervention by the Collective Security Treaty Organization and triggered the appointment of a new prime minister. While events in Kazakhstan will continue to impact regional geopolitics, some issues will remain generally unaffected, though it makes them no less important to the country’s future. One such issue is water, a sensitive topic throughout central Asia that is a major factor in Kazakhstan’s relations with China.

Geography is the fundamental reason why water has long been a source of tension among the nations of Central Asia. Kazakhstan, Turkmenistan, and Uzbekistan are downstream nations, while Kyrgyzstan and Tajikistan are upstream nations. The upstream nations use water flows for hydropower plants and the downstream nations primarily rely on water to support their growing agriculture sectors. Downstream nations’ governments have long called on their upstream neighbors to improve their water management policies and increase the amount of water they share. Thankfully, while minor incidents have occurred, the region has not seen a major war over water sharing. However, as climate change, population growth, and extreme weather patterns make access to water even more essential in the future, water will remain a key issue in the region.

Kazakhstan’s relations with China will also be critically important to its ability to meet its water requirements. This is because Lake Balkhash, Kazakhstan’s second-largest body of water, is primarily fed by the Ili River and the Karatal River, both of which are in China. Beijing will likely limit the flow of water from the Ili River to Lake Balkhash as it constructs dams and other water-related development projects in its western provinces.

While the northern Kazakh portion of the Aral Sea is slowly being restored, bilateral cooperation and dialogue between Nur-Sultan and Beijing will be vital in order to prevent a new international water crisis in Asia. The good news is that the two governments already have a history of successful cooperation on issues related to water. In 2018, an agreement was signed for the reconstruction of a Kazakh-Chinese joint water intake facility on the Sumbe River. In addition, a joint project to renovate a water diversion sluice on the Sumbe was finished in 2019. That same year, Kazakhstan ratified a bilateral agreement with China to construct a dam on the Khorgos River.

Another positive factor is that there are many avenues of communication between the two states. For example, high-ranking Chinese and Kazakh officials participated in the tenth meeting of the China-Kazakhstan Cooperation Committee in November 2021. In addition, Chinese premier Li Keqiang recently participated in the Twentieth Meeting of the Council of Heads of Government of Member States of the Shanghai Cooperation Organization (SCO). The virtual meeting was chaired by Kazakhstan’s then-prime minister Askar Mamin.

The two governments also routinely praise their strong bilateral ties. Chinese foreign affairs minister Wang Yi recently met with his Kazakh counterpart and declared that the “friendship between China and Kazakhstan” had been “elevated” during the fight against Covid-19. Interestingly, water issues were not mentioned in the press release that detailed the meeting.

It is important to note that there are sources of tensions between Beijing and Nur-Sultan. The treatment of ethnic Kazakhs in China’s so-called “re-education” camps and protests in Kazakhstan against Chinese land purchases have been notable issues between the two states.

Rather than confrontation, Nur-Sultan has focused on promoting dialogue with Beijing. This is a logical decision, as Kazakhstan and China are key trade partners and immediate neighbors with significant overlapping interests. Recalling ambassadors or imposing economic sanctions would create more tensions with Beijing than Nur-Sultan can afford. With this in mind, Kazakhstan must prioritize reaching mutually beneficial agreements with China. Negotiation and diplomacy, rather than aggressive diplomatic postures, will be the key to finding a solution that ensures Kazakhstan has an adequate supply of water in Lake Balkhash.

As a downstream country with a harsh environment and a major agricultural sector, Kazakh officials are acutely aware of the importance of water. Moreover, Nur-Sultan recognizes how important it is to maintain a productive dialogue with its neighbors over water issues. Kazakhstan’s stance toward its upstream neighbors is simple: water usage should be carried out without negatively affecting downstream countries.

The events of January will have a significant impact on Kazakhstan’s foreign policy vis-à-vis Russia and the United States. However, the future of relations between Kazakhstan and China will largely be driven by the politics of water. While China has the right to develop its territory to the benefit of its citizens, being upstream of Kazakhstan means that Beijing also has responsibilities toward its friendly neighbor. Continued dialogue between the two nations will be essential to resolve water issues and protect Lake Balkhash.