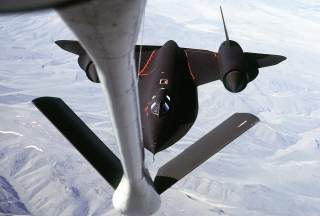 Taken in March 1990 the emotional video in this post shows the arrival of the iconic SR-71A Blackbird at the National Museum of the U.S. Air Force (USAF). During its career, this aircraft accumulated 2,981 flying hours and flew 942 total sorties (more than any other SR-71), including 257 operational missions, from Beale Air Force Base, Calif., Palmdale, Calif., Kadena Air Base, Okinawa, and RAF (Base), Mildenhall, England.

The SR-71, unofficially known as the “Blackbird,” is a long-range, advanced, strategic reconnaissance aircraft developed from the Lockheed A-12 and YF-12A aircraft. The first flight of an SR-71 took place on Dec. 22, 1964, and the first SR-71 to enter service was delivered to the 4200th (later 9th) Strategic Reconnaissance Wing at Beale Air Force Base, Calif., in January 1966.

Despite the aircraft’s incredible flight characteristics, the U.S. Air Force (USAF) retired its fleet of SR-71s on Jan. 26, 1990, because of a decreasing defense budget, high costs of operation and availability of sophisticated spy satellites.

Noteworthy Blackbird operations, except training flights, were officially terminated in November 1989, having been eliminated from the FY1990 Defense Department budget.

On Mar. 6, 1990, one Blackbird famously set a series of world speed records on its ‘retirement flight.’ The SR-71 with tail number 64-17972 was flown from California to the Smithsonian National Air & Space Museum (NASM) Udvar-Hazy Center at Dulles Airport, where it would eventually go on display. In the process, it set the official National Aeronautic Association coast-to-coast speed record of 2,086 miles in one hour and seven minutes, averaging 2,124.5 mph. It made the 311-mile St. Louis-to-Cincinnati leg in less than nine minutes, averaging 2,176.08 mph.