We Lost the War on Poverty: Why Welfare Keeps Poor People Poor 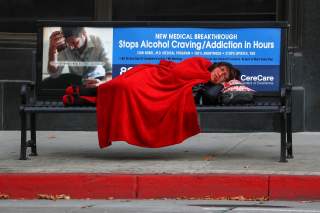 When President Lyndon Johnson launched his War on Poverty in the 1960s, he pledged to eliminate poverty in America.

The poverty rate remains mostly unchanged, and tens of millions of Americans are dependent on government assistance.

Currently, the United States spends about a trillion dollars a year on 80 different federal, state, and local welfare programs.

About 40 million Americans are considered poor. If we divided that $1 trillion among those 40 million people, we could give each person approximately $25,000 a year, or $100,000 a year for a family of four.

We’re clearly spending a lot of money, so why have we not ended poverty?

Our welfare system discourages work. It discourages families from staying together. And it encourages dependence on government.

In other words, welfare keeps the poor poor.

In many cases, welfare has harmed the very people it was supposed to help, especially children.

Why has this happened?

As welfare benefits grew over the years, they increasingly served as a substitute for a working parent.

As the taxpayer became the family breadwinner, that encouraged many men to stop upholding their responsibilities, leaving more and more women as heads of single-parent households.

On the other side of the coin, single mothers were discouraged from marrying the fathers of their children because that reduced their benefits.

Sadly, the cycle continues today as many children who grow up on welfare eventually follow in their parents’ footsteps when they have families of their own.

First, we have to understand that the problem with the current system is that it discourages work. Work is the fastest and most effective way to get out of poverty and become prosperous.

Welfare programs should be designed to offer temporary help while encouraging able-bodied recipients to find work and become self-reliant.

In states that have implemented time limits and welfare-to-work requirements, recipients have received job training, found jobs, and increased their incomes dramatically. They’ve also dropped off the welfare rolls.

Second, we must continue to create jobs that help recipients transition to work.

As we’ve seen in just the past few years, cutting taxes on individuals and businesses and cutting regulations that hinder business growth are the keys to massive new job creation, high levels of employment, and increased wages for workers.

Most Americans want a social safety net that helps those who can’t help themselves and they want to help the poor find meaningful work.

We’ve learned through decades of experience that throwing more money at poverty doesn’t end it. Temporary assistance, jobs training, growing the economy and promoting self-sufficiency do.

As we wage the war against poverty for the next generation, let’s fight smarter.

Genevieve Wood advances policy priorities of The Heritage Foundation as a senior contributor to The Daily Signal, where this first appeared. Send an email to Genevieve.