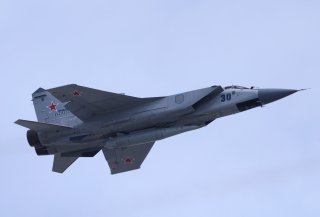 The Finnish Defense Ministry claimed on Thursday that two Russian MiG-31 jets had violated its airspace along the Gulf of Finland near the city of Porvoo, according to Reuters.

Kristian Vakkuri, the Defense Ministry’s head of communications, declared in a statement that the violation had occurred at 6:40 GMT, or 9:40 am in Finland. Vakkuri indicated that the two aircraft had been traveling west and had ventured roughly one kilometer into Finnish airspace for two minutes before departing.

Following the incursion, the Finnish Air Force sent up an “operational flight mission,” but it was not immediately clear whether the Russian jets had left of their own volition or had been escorted out. Finland’s Border Guard also announced that it had opened an investigation into the incident.

The airspace violation comes as Finland seeks accession to NATO, the U.S.-led military alliance Russia has described as a threat to its security. Finland and neighboring Sweden indicated that they would join NATO due to Russia’s invasion of Ukraine in February, which both Stockholm and Helsinki strongly opposed. Unlike Sweden, however, Finland shares an 800-mile border with Russia and is less than 100 miles from Saint Petersburg, Russia’s second-largest city. If ultimately admitted to NATO, Finland’s territory would roughly double the length of the military alliance’s border with Russia. Russian officials, including former President Dmitry Medvedev, have warned that the Kremlin could increase its force posture in its Kaliningrad exclave along the Baltic Sea in response.

To enter NATO, however, Finland must first receive the approval of all thirty current members of the alliance, a procedure that leaves open any country’s ability to veto the proceedings over political disputes. Seven countries—Czechia, Greece, Hungary, Portugal, Slovakia, Spain, and Turkey—have yet to approve Helsinki’s NATO bid. Turkey has threatened to veto the proceedings, claiming that Finland and Sweden had allowed anti-Turkish “terrorists” to settle in their territory and demanding their extradition in exchange for its agreement. The three countries reached an agreement on the sidelines of NATO’s annual conference in June. However, Turkish officials have warned that they could still veto the accession if they determined that Sweden and Finland were not following through on their commitments.

Finland’s Security and Intelligence Service warned in May that Russia might attempt to interfere in the accession process, stating without elaboration that “various attempts to do so are to be expected.”