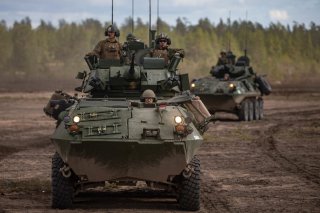 “Exercise KLAARA provided an opportunity for U.S. forces to work jointly alongside future allies in a dynamic environment throughout small island chains and constricted maritime terrain. This not only allowed Marines to practice their skills, but showed how partners navigate and operate throughout challenging waters.”

In addition to the benefit of improving joint operations, exercise KLAARA gave Marines the opportunity to try out Finland’s unique landing craft, a specialized armored boat specifically designed for accessing Finland’s littoral waters that can carry twenty-six passengers plus crew.

“The Jehu U-700 craft offered the Marines a unique opportunity to traverse through the constricted maritime terrain of the Finnish archipelago,” said the 22nd Marine Expeditionary Unit Commanding Officer Col. Paul Merida.

“Its ability to move the combat power of roughly a platoon reduced of Marines with a small physical signature is vital to operating within the coastlines and creates an operational advantage for Expeditionary Advanced Base Operations.”

Expeditionary Advanced Base Operations are a Marine warfighting concept that emphasizes having a distributed, highly decentralized force structure in recognition of the highly contested kind of future fight the Marine Corps would likely face.

The posture would, in theory, allow the Marine Corps to take on a powerful Chinese presence in the Pacific should a war break out between the United States and China.

The Jehu U-700 craft is very fast—capable of sprinting up to forty knots—and armored, offering the Marine Corps an advantage over the kinds of vessels they currently have in service.

“It was incredible,” said Sgt. Idan Urrutia, a machine gunner, in the Marine Corps statement. “On the inside they have screens, so while you’re in there you can still have a general idea of where you are going.”

The vessel was also well-regarded for its casualty evacuation abilities. “It has integrated litter sanctions that give it the ability to transfer 12 littered patients, which is the same as our MV-22,” U.S. Navy Lieutenant Lindsay Murphy explained. “Its maneuverability is second to none, and it offers the ability to interface with any of our blue-water or brown-water platforms.”

Though Finland is not yet part of the North Atlantic Treaty Organization alliance, the country will soon join, alongside its neighbor Sweden. The move comes at a time of heightened tensions in Europe following Russia’s invasion of Ukraine and underscores how seriously both historically neutral countries take the threat posed by Russia.