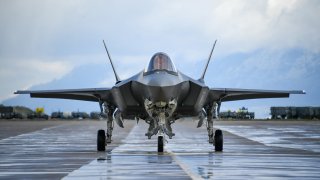 The U.S. Air Forces in Europe and Air Forces in Africa announced earlier this week that six F-35 Lightning II aircraft had been repositioned in the Baltic Sea region to support the ongoing NATO Enhanced Air Policing missions. The fifth-generation fighters have been supporting a variety of NATO's defense air policing objectives.

According to a report from TheAviationist.com, the F-35s had operated close to the border with Ukraine and possibly pointed their Electronic Support Measure (ESM) sensors towards Russian forces in Ukraine or Belarus. Images shared on social media also seemed to suggest that at least one of the F-35As deployed to the border did not carry the usual RCS (Radar Cross Section) enhancers/radar reflectors that are normally installed during peacetime operations.

That would mean the F-35 was "in its stealthiest configuration," which could be quite notable. David Cenciotti, founder of TheAviationist.com, explained the significance of that development.

"Stealth aircraft, such as the F-22 Raptor or the F-35 Lightning II 5th generation jets are equipped with Luneburg (or Luneberg) lenses: radar reflectors used to make the LO (Low Observable) aircraft (consciously) visible to radars,” Cenciotti wrote. “These devices are installed on the aircraft on the ground and are used whenever the aircraft don’t need to evade the radars: during ferry flights when the aircraft also use the transponder in a cooperative way with the ATC (Air Traffic Control) agencies; during training or operative missions that do not require stealthiness; or, more importantly, when the aircraft operate close to the enemy whose ground or flying radars, intelligence gathering sensors."

The Lockheed Martin F-35 was designed to accommodate different weapon load-outs to suit different missions. Its stealth capabilities – which include an exterior that has been precisely machined down to the ten-thousandth of an inch to baffle radars – make it ideally suited to penetrate defended airspaces and knock out defenses. Yet even in this mode it can still hold 5,000 pounds of bombs internally.

This could mark the first time that U.S. or allied F-35s may have been spotted operating so close to a potential adversary's airspace without the radar reflectors.

The F-35 was developed to be a "multi-role" stealth fighter, which in essence means that it was specifically engineered with an ability to launch massive air attacks on air-to-air and air-to-ground targets.

The aircraft uses an internal weapons bay intended to enable attacks against an adversary while preserving a stealth configuration, yet can be utilized in a full-force attack  by employing the external pylons as well – which has become known as its " beast mode" or "bomb truck."

The different weapon layouts are meant to accommodate a range of tactical scenarios.

The "First Day of War" loadout – which is likely how the U.S. Air Force's F-35s are now being sent into the skies – is meant to preserve the "stealth" configuration. It could likely consist of four AIM-120 AMRAAM missiles for air-to-air missions, or a mixture of four AIM-120s and GBU-31 JDAM "smart bombs," for air-to-ground missions, all of which would be loaded into the F-35's internal armaments bay. As the name implies, stealth loadouts are designed to minimize radar cross-section and to maintain low observability (LO) when the enemy's anti-air systems are operating at full capacity.

As an adversary's hostile anti-air systems – including sensors, air defense missiles, gun systems, and enemy aircraft – are eliminated, and the conflict enters into the "Third Day of War,” the loadout would change accordingly. When it is determined that the F-35 no longer needs to rely on its stealth and LO for survivability the "beast mode" comes into play as the F-35 then deploys externally-mounted weapons with a larger radar footprint.

The weapons loadout is significantly larger.