West Michigan Veteran Honors the Legacy of the Patton Tanks 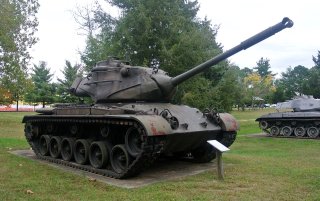 It isn't uncommon to see a vintage Patton tank in front of a National Guard armory or a meeting hall for the Veterans of Foreign Wars these days. The steel behemoths have remained an iconic piece of U.S. military history from the Cold War. Even after being retired from service many that were once used by the U.S. Army have been converted into patriotic displays.

However, time has taken its toll on most of those old war machines. Many Patton tanks on display around the country are now falling into disrepair. Few of the Cold War fighting machines are actually operational. That may be surprising given the sheer number built in the 1950s and early 1960s.

Some 8,500 M47 and more than 12,000 M48 Pattons were produced for use by the United States military and partner nations. While long retired from service with the U.S. military, the M47 and M48 Pattons were widely exported, and some remain operational in foreign militaries.

Iran and Spain reportedly are the only remaining operators of the M47. Spain uses its Pattons mostly for training. However, the Islamic Republic reportedly operates about one hundred seventy of about four hundred originally delivered in the 1960s. Those were upgraded prior to and during the Iran-Iraq War, but the exact capabilities of the Iranian Patton tanks remain unknown. It is unlikely that the M47s would hold their own against more modern tanks, but Iran has shown itself adept at keeping the tanks operational.

The M48, which was produced until the early 1960s, was the U.S. military's workhorse during the Vietnam War. It remains one of the most successful post-World War II era tanks built.

Thousands are still in service around the world. In addition to Iran, which also has a significant number of upgraded M48 tanks in its arsenal, Greece, Lebanon, Morocco, South Korea, Taiwan, Thailand, and Turkey all currently maintain significant numbers of the M48 Patton main battle tanks (MBTs).

The U.S. military may have no operational Pattons in service, but a few are now in private collections. Actor and former California Governor Arnold Schwarzenegger famously owned an M47 that he had operated during his time in the Austrian Army. The Austrian-born former Mr. Universe has employed his tank to support his charity efforts.

But he isn't alone in seeking to preserve the historic tanks.

U.S. Army veteran Robert Bowyer recently led the efforts to restore both an M47 and an M48 tank. Both examples are set to go back on permanent display. The tanks are actually the property of his employer, RENK America, formerly known as L-3 Combat Propulsion Systems. It has manufactured propulsion packages for U.S. military combat vehicles for decades.

After joining the company in 2018 as a business development representative, Bowyer discovered the tanks rusting away on the company's property. As a combat veteran who served two tours in Afghanistan, Bowyer successfully convinced RENK's management that putting the tank on display could serve to honor the veterans at the company and in the community.

"I just kept saying it would be cool to take these two pieces of history and clean them up, paint them and put them out front," Bowyer told Mlive.com. "I wanted to show the employer and the community who we are and make us an identifiable place that when you drive by, you smile."

Leading a team of volunteers, Bowyer hired a sandblaster and painter. Restoration work of the Pattons began last summer. The two tanks were finally moved to the front lawn of the Western Michigan-based company's front lawn at the end of January.

Bowyer previously personally restored an old Vietnam War-era river patrol boat which he uses to give rides to veterans and their families. With the support of the community and other volunteers, it has evolved in the nonprofit Black Sheep Operation, which now serves to provide meaningful and engaging experiences to recognize and honor the sacrifices, courage, and valor of all military veterans.

Now that the two Patton tanks have been restored to their former glory, Bowyer said he'll turn his attention away from more military-themed projects – at least for the time being.

"I am most looking forward to finishing the restoration on our family boat and spending time with my family," Bowyer said. "I don't want another project to work on as far as military restorations go."

Who knows? There could be more Patton tanks in need of some restoration, and Bowyer sounds more than up to the task.