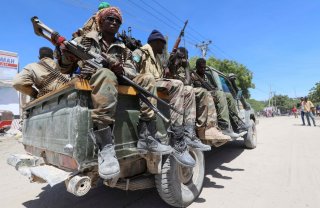 While all eyes remain on Russia’s ongoing invasion of Ukraine, an insidious spread of terror activity threatens to destabilize the entire Horn of Africa. In the last year and a half, nine coup attempts have rocked the continent. Militaries launched successful takeovers in Chad, Sudan, Guinea, and Burkina Faso and attempted at least four others. Although a variety of factors outside of economic insecurity and violent insurgency helped drive these coups and coup attempts, one commonality has led to a significant increase in terror activity: the governance vacuums created by widespread disillusionment across Africa have opened pockets of opportunity for jihadist groups to exploit. Without an urgent priority shift in the White House to address the looming threat in Africa, ISIS and Al Qaeda affiliates are bound to gain a stronger foothold in perhaps a new terror frontier.

This month, U.S. military commanders urged the White House to approve the movement of several hundred troops in Somalia to help deter the growth of Al Qaeda’s most successful local export, Al-Shabaab. Coupled with American troop withdrawals from the region that took place under Donald Trump’s presidency, a sharply reduced number of U.S. airstrikes targeting militant groups has likely emboldened terrorists to ramp up attacks. U.S. officers are most concerned with the potential expansion of the Al-Shabaab network.

The terror group’s main objective is to establish an Islamic Caliphate in Somalia and it has acquired an estimated 5,000-10,000 fighters over the last decade. Calls for a redistribution of U.S. troops on the ground in Somalia also follow the publicization of findings from a 2020 attack that killed two American civilian contractors in Kenya. The findings from the investigation concluded that “poor oversight” and “insufficient planning for potential threats,” among other U.S. failings led to Al-Shabaab’s successful attack. The report’s findings indicate that without a more permanent American troop presence on the ground to deter terror groups and coordinate air attacks, when necessary, Al-Shabaab and its counterparts will remain unchecked.

While Al-Shabaab certainly plays a significant role in the terror expansion network that is sweeping Africa, ISIS affiliates should not be understated. In the Global Terrorism Index released this month, Sub-Saharan Africa accounted for nearly half of global terrorism deaths in 2021. In this report, ISIS replaced the Taliban as the globe’s leading perpetrator of fatal terror attacks last year, “with 15 deaths per attack in Niger.” Last October, ISIS bombed a well-frequented pub in Uganda. One month later, a Somalia suicide bombing narrowly missed the prime minister but killed several other top commanders. More civilians were killed in late January 2022, when terrorists brutally attacked a hotel in Somalia.

Sub-Saharan Africa is already on track to surpass its 2021 numbers and potentially account for more than half of global terrorism deaths in the world this year. More concerning, jihadist activity is veering south, which will inevitably shift the threat thought to be contained in the Sahel belt to the Gulf of Guinea coast. Authorities in the Ivory Coast have reported thirteen cross-border terror attacks in the last year. While this number seems minimal in contrast to the thousands of attacks that plagued its northern neighbors in the same time frame, the rate and sophistication of the attacks are alarming.