What Afghanistan’s National Resistance Front Can Learn from the Taliban 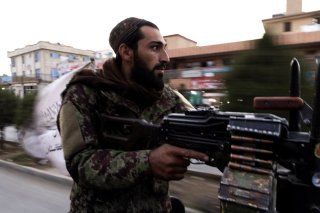 After the Taliban’s return to power in August 2021, the only indigenous armed group that has attempted to militarily resist the Taliban is the so-called National Resistance Front (NRF), which is mainly based in Panjsher and Baghlan provinces. The NRF operates as a guerilla force and by and large has not had any tangible success against the Taliban yet. If the NRF wants to succeed, or at least seriously challenge the Taliban authority, it should take a leaf from the Taliban’s insurgency playbook.

The Taliban swept to power by force. Outside of major cities, the Taliban had successfully resisted the United States and its NATO allies for twenty years; in cities too, they had created an atmosphere of fear and mistrust mainly through suicide and road bombings. As the United States was pulling out its troops last summer, the Taliban fighters were tightening their noose around Afghan cities, and their battle-hardened fighters were smelling success.

In addition to battlefield achievements, the Taliban also bribed and made alliances with local and regional power brokers to expedite their takeover of Afghanistan. Constantly shifting alliances and changing sides are a permanent feature of Afghan politics. For instance, in the dying days of the Najibullah government in 1991-92, the Afghan Mujahedin made similar deals with the Najibullah government’s military officers, who defected with men and ammunition to survive the imminent government collapse. The British writer Stephen Wheeler observed in the late nineteenth century that: “To the Afghan mind, perhaps, skillful diplomacy consists mainly in changing sides at the right moment.”

If some, or perhaps many, in the Ghani government chose not to resist the Taliban on the battlefield, it was not because of a conspiracy on the part of Ashraf Ghani and his administration to deliberately hand over the government to the Taliban (Ghani did try his best to hang on to power as long as he could). The actual reason was that the Afghan National Army (ANA)—being on U.S. life-support for two decades—did not have the capability and maturity to fight and survive on its own. From the start, the ANA was programmed to fail, given its dependence on the United States and a lack of internal cohesion coupled with pervasive corruption. The ANA officers knew this well. Therefore, most decided to lay down their arms and head home or leave the country.

Had the Taliban indeed come to power, not by military force, but through a major conspiracy by Ghani (as conspiracy theorists argue), then why are they still in charge today, and are not being driven out of power? The fact of the matter is that deals and shifting alliances notwithstanding, the Taliban captured Afghanistan by force of arms. Now if the NRF wants to be taken seriously, then it must follow the Taliban’s insurgency manual.

When the Taliban were being toppled in 2001, they wanted to negotiate their way out of power. The United States, however, turned the Taliban down, leaving them no choice but to return to the battlefield. Having taken up arms, the Taliban waged a relentless insurgency campaign for two decades. By 2019, the tables had turned, and now it was the United States that wanted to negotiate its way out of Afghanistan. The key takeaway from the Taliban’s successful insurgency is that, through unflinching military resistance, they made the world listen to them and engage them. For sure, the Taliban have consistently lied and backtracked on many of their promises, especially concerning girls’ education and women’s rights, but that is not the objective of this writing.

At this point, however, the NRF seems focused on first finding foreign sponsors to support its struggle against the Taliban. That is a recipe for failure, or at best a distant success. Instead of spending time in Western and regional capitals, the NRF should first focus on actual battlefield achievements. Remember what the Taliban did: they first fought successfully and then started touring regional capitals, not the other way around.

Once the NRF successfully resists the Taliban, and has some tangible achievements such as capturing quantifiable territory in the form of a provincial district or capital, then it will automatically start attracting international attention to its cause. In addition, the NRF’s battlefield achievements will also lead to local and regional power brokers abandoning the Taliban, and coming over to the NRF. Thus, if it is to survive and succeed, then the NRF must fight seriously, and start showing tangible success.

Yes, the Taliban had sanctuaries in Pakistan, but keep in mind that the Taliban were fighting against U.S. and NATO troops, who were armed with the most sophisticated weapons in the world. The NRF is up against the Taliban, who may have been successful as a guerilla force but will find it hard to suppress a rival guerilla movement, especially in central and northern Afghanistan, where the terrain and (non-Pashtun) population are not too friendly to the (Pashtun-majority) Taliban. Finally, the NRF also has sanctuaries in neighboring Tajikistan, and its political leadership is moving back and forth between various regional capitals such as Dushanbe, Ankara, and Tehran trying in vain to secure foreign support. The NRF rank and file should remember the saying that advises: “success begins at home.”