What the Arab-Israeli War of 1973 Can Teach Us Today 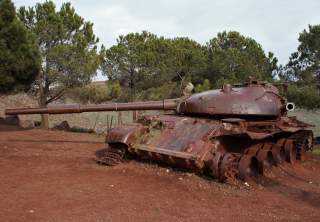 It is widely agreed that there are three levels of war. From the general to the local, they are the strategic, operational, and tactical levels. Strategy is the alignment of means and ways to accomplish a political end. Strategy is about winning the war. Tactics consist of locally achieving victory through a series of actions that, taken globally, participate directly or indirectly in the accomplishment of strategy. Tactics are typically about winning battles. Finally, operations consist of connecting the tactics to the strategy. To do so, the operational level aims to create campaigns—a series of tactical actions which pursue specific operational aims—to ultimately accomplish specific strategic goals. The operational level is typically about winning a series of campaigns to accomplish the stated strategy.

Each level of war is essential to achieve success, and are all equally important. The Arab-Israeli War of 1973 provides an illustration of why the tactical level is essential. This article will first provide elements to understand the broader aspect of the conflict, before demonstrating how the lack of tactical skill doomed the attackers.

After the Six Day War of 1967, Israel took the Sinai from Egypt and the Golan Heights from Syria. Egyptian leader Muhammad Anwar el-Sadat wanted to resolve the Egyptian-Israeli conflict diplomatically, but failed. Consequently, he decided to use force. Syrian leader Hafez al-Assad also wanted war with Israel, in part to avenge the Syrian defeat of 1967.

While al-Assad initially sought the destruction of Israel, Sadat persuaded him to agree to limited objectives: the recapture of the Sinai and the Golan, a settlement of the refugee problem, and the recognition of a Palestinian entity. The Egyptian leader considered that these objectives did not pose a threat to the vital interests of Israel, and would not provoke a nuclear retaliation.

The Egyptians designed a set-piece offensive to accomplish these objectives. They were to surprise the Israelis, cross the Suez Canal, push 8 to 16 kilometers into the Sinai, then dig in. They would then defend their gains against the Israelis and wear them down with entrenched infantry equipped with anti-tank equipment covered by a comprehensive anti-air defense system. To compensate for past difficulties with combined arms, initiative, and tactical improvisation, the Egyptians scripted the entire operation down to the last detail. Every squad and platoon had scripted orders to follow, and the troops rehearsed the operation.

The Syrians wanted to conquer the Golan Heights within 24 hours then prepare defenses to face a counterattack. Specifically, they wanted to achieve two breakthroughs in the area north of Quneitra and in the south-central region at ar-Rafid, and exploit these to move into the Israeli rear. The plan also called for a stabilization of defensive lines along the Jordan River or on the Western slopes of the Golan by seizing the small number of entry points into the Golan from Israel, sealing the plateau to prevent a counterattack and trapping the defenders in the Golan itself. Like the Egyptians, the Syrians scripted their offensive in great detail, and they learned the operation until they knew it by heart.

The Egyptians and the Syrians were to launch the offensive at the same time, on two different fronts, and catch the Israelis by surprise. Indeed, Israeli intelligence failed to anticipate the threat. As a result, Israel was largely unprepared for a two-front strategic offensive. Moreover, the attackers had an absolutely crushing advantage in numbers.

STRENGTHS ON EACH FRONT

Clearly, the Israelis were at a terrible numerical disadvantage, with a ratio of roughly 1 to 11 in the Sinai, and of 1 to 10 in the Golan, considering soldiers, tanks, and artillery pieces altogether. Only in the air did they roughly have a 1-to-1 ratio, but this parity only considered one attacker at a time. Taking both the Egyptian and Syrian Air Forces together, the Israelis had half the aircraft of their adversaries.

EXECUTION OF THE OFFENSIVES

The attackers launched their two-front assault on October 6th. The Egyptian offensive proceeded far better than expected. Within 18 hours, 90,000 soldiers and 850 tanks crossed the Suez Canal. After crossing, the attackers began consolidating and expanding their bridgeheads. The Egyptians beat back every counterattack, and by the end of the first two days, the Israelis lost 200 of their 300 tanks. However, the Egyptians abandoned their secure positions as their political leadership decided to come to the aid of their Syrian ally who was being badly mauled by the Israelis. Consequently, a new offensive, this time not scripted or rehearsed, was launched on October 14th. The attack was a catastrophe, and the Israelis soon counterattacked and severely damaged the Egyptian forces. The fighting stopped on October 28th, when Israel agreed to a ceasefire in part due to international pressure. The Egyptians lost their initial gains and were pushed back to the west bank of the Suez canal.

On the Syrian side, the assault was catastrophic from the start and achieved few gains while suffering enormous casualties. The Israeli tanks were shooting faster and straighter, and the destruction of advancing Syrian vehicles led to a massive traffic jam. The first day of the battle was an overall failure for the Syrians, though they did manage to penetrate the general defensive line and seize portions of the Golan to within a few kilometers of the Jordan River passages. They also captured the Mount Hermon outpost. Specifically, the northern sector of the Golan was holding, but the southern sector had been penetrated.

On the second day of the battle, the Syrians were far behind schedule; they had not yet descended the plateau and had given up on seizing the bridges overnight. The failure to take the bridges allowed the Israelis to continue rushing reserves into the Golan. The next day, on October 8th, the Israelis amassed enough forces to mount a counterattack to push the Syrians back, and fighting ensued. The Israelis managed to push the Syrians all the way back into Syria through October 14th. The belligerents then accepted a United Nations-brokered ceasefire on October 23rd.

The attackers had perfect conditions to accomplish at their operational goals. Indeed, they enjoyed strategic surprise, crushing numerical superiority, a simultaneous two-front attack, and the complacent overconfidence of their enemy. Yet, they were dramatically beaten on the battlefield. Their crushing defeat can be primarily blamed on catastrophic tactical skill.

The Egyptians were initially successful during the scripted part of the conflict, but even then the Israelis only had about 30 reservists defending each fort of the Bar Lev line, as opposed to about 100 professional soldiers in times of tension. Towards the end of the initial offensive, Egyptian difficulties started to appear. As soon as the effects of surprise, numerical superiority, Israeli unpreparedness, and the script faded, the tactical dearth of the attackers started showing. During the improvised offensive to help the Syrians, the Egyptians were slow and rigid. Units attacked piecemeal, battlefield commanders were not adaptive, assaults were only frontal with no maneuver, and there was little to no combined arms integration. Mechanized infantry never dismounted, artillery barrages were ineffective, tanks did not maneuver and merely tried to frontally overwhelm the Israelis with firepower. During the ensuing Israeli counteroffensive, the Egyptians failed to adequately scout their attacks; their armor launched clumsy frontal assaults, failed to maneuver, and were unable to adapt when caught from the flank or rear. In the air, the Egyptians suffered a ratio in casualties of about 25 to 1.

The Syrians performed even worse, and repeatedly proved incapable of tactical skill, even when the offensive was scripted. When the lead armored vehicles were destroyed during the first assault, the others kept driving forward, refusing to stop or move off the roads to bypass the destroyed vehicles, causing numerous collisions which made the traffic jam even worse. The Syrians refused to retreat unless ordered by higher command to do so, even if it was for mere maneuver. Like the Egyptians, they failed to use combined arms integration to their advantage. Notably, they did not give their infantry a larger role other than merely accompanying armored units, although they were in theory and, in terms of equipment, perfectly capable of destroying Israeli tanks. For instance, the Syrian 43rd Mechanized Brigade, by its own initiative, tried to take the defenders from the rear around Quneitra, but failed to deploy adequate scouts or flank guards. As a result, the unit was repeatedly ambushed and mauled by only seven tanks, while the attackers fielded 45, of which only five remained intact at the conclusion of the engagement. After this encounter, the Syrian unit pulled back. In the air, the Syrians suffered casualties at a ratio of about 1:16.

MATERIAL ADVANTAGE IS NOT TACTICAL EFFECTIVENESS