What Are U.S. Weapons and Supplies Doing to Help Ukraine? 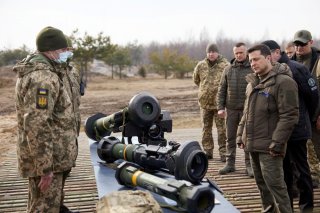 The Pentagon is placing a huge priority on continuing to provide the things Ukrainian fighters most need in their fight against the Russian invaders. This translates into a steady stream of body armor, small arms, medical supplies, anti-tank missiles, and shoulder-fired anti-aircraft weapons.

“What we're focused on are the kinds of things that we know they're using very effectively, the Javelin, the Stingers, small arms, and ammunition. … We're focused on getting them those things as well as … medical supplies, and again, body armor and helmets. That's what we're focused on,” a senior Pentagon official said this week.

What about fighter jets? When asked about the Pentagon’s decision not to provide Polish fighter jets to the Ukrainians, the official was clear that the United States would not block any country from providing fighter jets to Ukraine should they want to.

“If another nation has fixed-wing aircraft that they want to provide to Ukraine, that is their decision to make, and the United States is not going to stand in the way,” the senior official said. “We didn't put a veto on people providing fixed-wing aircraft to the Ukrainians.”

The official’s remarks leave open the possibility that NATO countries could provide fighter jets to Ukraine at their discretion, but it seems that the United States is reluctant to do so itself. However, the Pentagon official did talk at length about air defenses, saying that the effective use of surface-to-air missile (SAM) systems is a significant reason why the airspace remains contested. Russia is engaging in some dog fights with Ukrainian pilots and, as the Pentagon official put it, likely being “risk-averse” and avoiding areas where SAMs can place them at risk. For this reason, the Pentagon continues to work with allies to help ensure Ukraine receives air defenses.

“We're also focused on working with other allies and partners to help get them more long-range air defense systems that they're trained on, that they know how to use. And quite frankly, they're using it very effectively. That is the big reason why the airspace is contested and the Russians have not achieved their superiority. It's one reason why we're seeing fairly risk-averse behavior out of some Russian pilots because they don't want to loiter around in airspace that … they know [is] covered by Ukrainian SAMs,” the official said.