What Awaits the Syrian Arab Army? 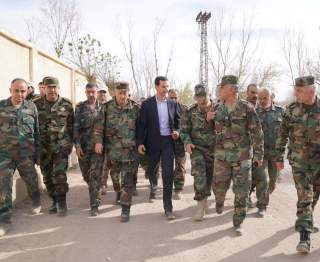 The military, shaped by the dominance of praetorian units with pronounced Alawite sectarian identity, has always been the central pillar of the Syrian Baath regime. Hafez al-Assad’s legacy has also led to a Soviet-fashion oversight of several intelligence agencies over the armed forces. Besides, Assad’s rule has built a tailor-made military housing system for the officer corps, especially for those staffing the elite units, which linked almost every aspect of their lives to the regime. Overall, these factors have prevented a total collapse of the Syrian Arab Army, as well as en masse break of conventional formations, although defections plagued the bulk of the infantry.

The trajectory of the Syrian Arab Army will conclude what postwar Syria would resemble at large. After all, one should recall that the Assad family has seized the political power through a coup d’état, and the Baath regime has always depended on the politico-sectarian design of the military. The Syrian Arab Army either will return to its Cold War origins or will have to be overshadowed by Iran’s proxies.

Dr. Can Kasapoglu is the defense analyst of the Istanbul-based think-tank EDAM and IPC-Stiftung Mercator Fellow at the German research institute SWP. Dr. Kasapoglu holds a Ph.D. from the Turkish War College and an M.Sci. degree from the Turkish Military Academy. Previously he was an Eisenhower Fellow at the NATO Defense College in Rome and held a visiting research post at the NATO Cyber Center of Excellence in Tallinn. His works can be followed @EdamDefense