What Can the U.S. Navy Learn from a Crashed Sea Helicopter? 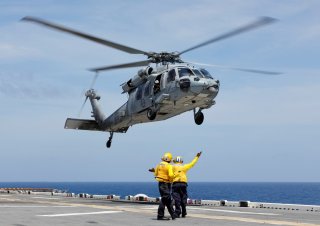 One way to find out how a helicopter crashed into the ocean is to go down and recover it from thousands of feet below the surface, something that the Navy recently accomplished off the coast of Japan when it recovered a crashed MH-60s helicopter at a record depth of nineteen thousand feet.

While no crew members died, the Sikorsky-built Seahawk helicopter crashed last year after taking off from a Navy amphibious assault ship during routine operations in the Pacific.

The recovery operation, conducted by the Navy’s supervisor of salvage and diving, involved divers, salvage equipment, included locating and documenting the wreckage using “side-scan” sonar and photographs of the helicopter as it lay on the ocean floor.

“As a whole, this operation was fast-paced and entirely successful,” Bryan Blake, the deep ocean program manager for Ocean Engineering, Supervisor of Salvage and Diving, said in a Navy report. “Our efforts validated the Navy’s deep ocean search and recovery requirements. The capability to recover the airframe and make it available to determine the cause of the accident is a huge plus helping to ensure Naval Aviation safety.”

One key piece of technology used in the operation, called CURV 21, is a deep-water vehicle able to be operated remotely for missions as deep as twenty thousand feet. Weighing more than six thousand pounds, the CURV descends beneath the surface to recover objects from the bottom of the ocean. In the case of this helicopter, lost from the Navy’s USS Blue Ridge amphibious command ship, CURV 21 was able to leverage its “deep-lift take-up reel,” the Navy report said.

What might investigators learn from the wreckage above and beyond what surviving crew members might report? The helicopter may contain somewhat “in-tact” structural systems which could offer some kind of forensic evidence or indication of what might have happened. Perhaps there was some kind of malfunction of the rotor blades or a crack in the external structure? Recovery and close examination of the down helicopter is likely to reveal these kinds of potential clues. The wreckage itself will likely introduce new investigative methods of course aimed at preventing this kind of potentially fatal crash from happening again.

MH-60 helicopters such as this often operate close to the surface in rough seas where turbulent waters and high crosswinds can complicate operations. Various kinds of submarine hunting, for example, rely upon having maritime-specifical helicopters such as the Seahawk lower sonobuoys from heights just above the water. Therefore, perhaps there was some kind of mechanical or engineering glitch which caused the helicopter to lose lift suddenly and crash into the ocean.