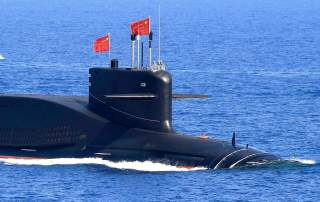 Let’s hope that these are just academic discussions in the Chinese context and do not reflect actual weapons under development.

That makes the North Korean “threat” look fairly insignificant by comparison, doesn’t it?

But what’s really disturbing is that the scenario described above envisions a strike by China’s largely antiquated DF-5 first generation ICBM. In other words, the illustration is perhaps a decade or more out of date. As China has deployed first the road-mobile DF-31, then DF-31A and now JL-2 (a submarine-launched nuclear weapon), China’s nuclear strategy has moved from “assured retaliation” to what one may term “completely assured retaliation.”

As one can see from this discussion, there is ample reason for anxiety with many new Chinese nuclear systems now coming online, as well as a substantial reason for optimism. As an author who frequently rides China’s high-speed rail [高铁], I am acutely aware that astronomical sums of money spent on that system could just as easily have been spent building an enormous arsenal of nuclear weaponry. That was not done and it’s certainly good that Chinese leaders have their priorities straight. American strategists need to keep this Chinese restraint in mind, especially as they weigh both new, expensive weapons systems (missile defense augmentation, the new strategic bomber, SSBN-X and also prompt global strike) and a set of measures to counter Beijing within the maritime disputes on its flanks.