What the Civil War Can Teach Us About Modern Naval Warfare 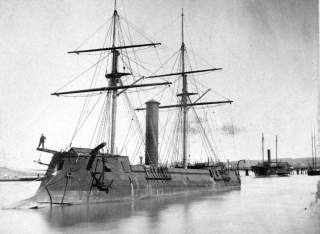 Key point: The experience of the weaker Confederate Navy is illustrative for how smaller powers should, or should not, fight larger powers.

Today the U.S. faces renewed global competition, and conventional and asymmetric naval threats. The future U.S. way of war must innovate beyond the Second World War strategy of out-producing adversaries, since the U.S. has fewer shipyards and its rivals may have greater industrial capacity. Luckily, U.S. history offers examples of the U.S. as both a dominant power as well as an underdog. The Confederate States Navy provides an excellent example of an under-industrialized innovative underdog struggling to defend itself against an industrial juggernaut.

During the “War Between the States,” also known as the American Civil War, the Union Navy held as close to permanent general sea control for the duration; but the Confederate Navy waged an effective campaign to deny sea control in the littorals of key port cities. Maritime strategist and theorist Julian Corbett divided the concept of sea control between local or general, temporary or permanent. Sea control means controlling the sea lines of communications (SLOCs) one side needs to maintain while fighting to deny that control to the adversary. One does not need to control the sea to deny it to an adversary. Sea control does not mean that the enemy will not be able to raid SLOCs, but rather those raids will not have a decisive impact on the war.1

The Confederate Navy is considered a failure by popular belief because the Southern fleet was unable to break the Union blockade. The navy designed by Confederate Secretary of the Navy Stephen Mallory was not built to break the blockade, but for “desperate and unequal battle to protect land against sea.”2 This battle began poorly. The Union Navy waltzed into Port Royal, South Carolina, steamed past the Confederate guns at Fort Hatteras, and took control of the North Carolina sounds. Both ports were defended by guns that were out-ranged by the Union Navy.

The Confederate Navy needed a new plan, and with limited resources only a few places could be adequately defended. Secretary Mallory and General Robert E. Lee compiled a list of priority ports. Union leaders of the Blockade Board did the same. Interestingly, both concurred that the key Southern ports were Norfolk-Richmond, Wilmington, Charleston, Savannah, Mobile, New Orleans, and Galveston.

In order to defend these ports Secretary Mallory focused his limited resources on denying sea control by increasing the survivability of warships through iron armor and improved anti-access weapons such as accurate long-range artillery and mines. When established together, this Confederate three-pronged approach successfully defended key Confederate ports. The new Confederate Navy was built to deny sea control near key Confederate ports to enable blockade runners to continue to supply the South, so that the army could continue to resist ashore. Charleston, Wilmington, and Richmond were not conquered by naval invasion but rather fell to the Union army advancing from the rear or, like Mobile, required weakening the Union blockade of Charleston to mass the forces required to invade. This trident approach enabled the South to maintain local sea control in the vicinity of key ports to keep those ports open.3

The theory was that mines and narrow channels limited the maneuverability and fighting effectiveness of ships operating in littoral waters. Well-placed minefields forced ships within range of coastal defense artillery which increased the accuracy and damage of the Confederate Brooke rifles.4 Damaged vessels that got past the mines and coastal defense artillery would have to face the ironclads. This system successfully defended Charleston, Wilmington, and Richmond.

A map of the American Civil War. (Wikimedia Commons, Click to Expand)

However, the Battle of Mobile Bay demonstrated the inherent weakness of the system. The bold and innovative Union commander Admiral Farragut was not deterred by the mines. He placed anchor chains along his ships’ sides as improvised armor and steamed past the forts with their heavy guns to swiftly attack the single heavily outnumbered ironclad. CSS Tennessee’s steering system was outside the protective armor. Once the steering chains had been shot away, Tennessee was unable to maneuver and was overwhelmed by superior numbers.5

From the beginning, it was clear that the South was at a distinct disadvantage in terms of shipbuilding. With little maritime tradition, few shipyards, and a meager industrial base she could not out-build the Union. Secretary Mallory knew ironclads were the answer. Before the Confederate capital had even moved to Richmond, Secretary Mallory was planning an ironclad navy. On April 26, 1861, Secretary Mallory wrote to the chairman of the House Committee on Naval Affairs:

“I regard the possession of an iron-armored ship as a matter of the first necessity… Inequality of numbers may be compensated by invulnerability; and thus not only does economy but naval success dictate the wisdom and expediency of fighting with iron against wood, without regard to first cost.”6

In Norfolk, Lieutenant John M. Brooke and Chief Naval Constructor John Porter cooperated on a design for a casemate ironclad built on the hull of the frigate Merrimack. With modifications, the basic design became the standard for Confederate ironclads. Richmond and Charleston each completed three ironclads, along the rivers of North Carolina, four were completed, and Savannah and Mobile each completed one. More ironclads were under construction along the Mississippi and other cities. But construction was hampered by material shortages and transportation issues. Throughout the war, 50 ironclads were laid down and 22 of them were commissioned.

However, most Confederate ironclads had maneuverability issues resulting from under-powered engines and deep drafts. Engineering plants were under-powered because the South lacked the capability and expertise to build new plants and used whatever old systems could be salvaged.7

Congressional appropriations and civic societies, including women’s ironclad societies, raised money in major cities to support construction of ironclads like CSS Chicora and Palmetto State in Charleston. Both congress and the citizenry had an expectation that the ironclads would go to sea and break the blockade. Congressional pressure often forced untimely offensives that resulted in disaster. For example, CSS Atlanta was captured by Union forces after she sortied from Savannah in an ill-advised attempt to break the blockade of Savannah against the recommendation of her captain. She ran aground at low tide in the river and was forced to capitulate. 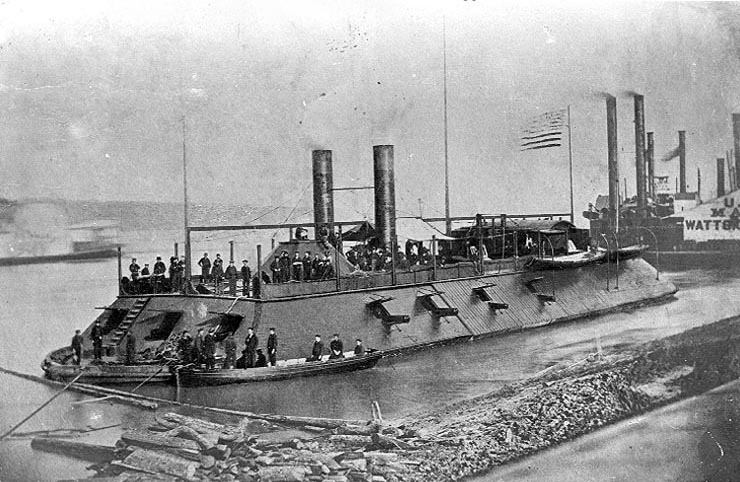 The USS Cairo photographed in the Mississippi River area during 1862, with a boat alongside her port bow, crewmen on deck and other river steamers in the background. (Wikimedia Commons)

In Charleston, Chicora and Palmetto State conducted a sortie to attack the inshore blockading squadron. They damaged USS Mercidta and USS Keystone State. The Union blockading fleet abandoned the inshore blockade for several weeks until it became clear the two ironclads would not continue patrolling offshore.8

In North Carolina, the Albemarle sailed into the sound and sank the Miami and Southfield, and took part in the liberation of the cities of Plymouth and Washington. She was supposed to rendezvous with the Neuse to support the Confederate Army’s attack on New Bern, but was delayed. The Albemarle struck such fear into the Union fleet that they abandoned the North Carolina sounds. Albemarle was eventually sunk by Union Lieutenant William Cushing in a daring raid up the Roanoke River. Lieutenant Cushing used a steam launch equipped with a spar torpedo to destroy the ironclad.9

Richmond demonstrated the effectiveness of the fleet-in–being, behind obstructions, mines, and powerful artillery. The large Union fleet could not force the obstructions. In January 1865, Secretary Mallory wrote to Captain John Mitchell, commander of the James River Squadron, “If we can block the river at or below City Point, Grant might be compelled to evacuate his position.”10 On January 23-24, 1865, the Confederate fleet sortied, while Union ironclads of the James River Squadron were hundreds of miles away attacking Wilmington. This attack was defeated by the shallow depth of the James River and the Confederate commander’s caution. After a series of groundings, the Confederate fleet returned to its defenses. General Grant understood how close the Confederate Navy had come to raising the siege of Petersburg. If a Confederate ironclad got to City Point, it could destroy the Union supply ships that supported the Union Army besieging Petersburg. Despite frantic telegraphs, the Union James River Squadron did not steam to support the Union batteries. General Grant was lucky that Captain Mitchell had been spooked by the groundings and worried about the impacts of losing his fleet on the defense of Richmond.11

The War Between the States is often used as a demonstration that the adage, “a ship’s a fool to fight a fort” was dead. It was assumed that advances in naval artillery meant that the ship would always win. If one examined the first few disasters of the war, this might be the case. Bold Union attacks in Hatteras, North Carolina, Port Royal, South Carolina, and Galveston, Texas showed the weakness of Confederate artillery early in the war. The Confederacy needed heavy guns. In addition to his work on the Virginia, Lieutenant John M. Brooke also developed a new artillery piece, the 6.4 inch Brooke Rifled Gun, which was outfitted on the Virginia for its contest with Monitor. The Union Parrot Rifled Gun had a single reinforcing iron band around the breech, but the Brooke Rifle had multiple reinforcing iron bands increasing the strength of the gun and enabling it to use more powder to give projectiles greater range.12 The 7 inch Brooke Rifle’s maximum-range of 7,900 yards easily out-sticked the range of Union Parrot Rifles and Dahlgren guns.13 In addition to developing this new gun, Lieutenant Brooke also developed new bolts to fire from the guns. On 26 October 1862, he wrote in his journal that one of these new bolts pierced three two-inch plates and cracked the wood backing.14 These new guns would play a decisive role in preventing the Union Navy from repeating the easy victories of 1862.