What Do Hitler, Saddam Hussein and Gaddafi Have In Common? They Loved Golden Guns. 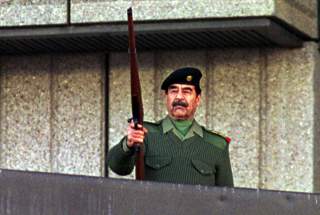 In April 2003, shortly after the U.S. military invaded Baghdad and Saddam Hussein went into hiding, an unidentified U.S. serviceman tried to ship home an AK-47, a pistol and another rifle to Fort Stewart, Georgia. Unfortunately for him, the “souvenirs” or looted items — depending how you look at it — were intercepted at London’s Heathrow Airport.

But these weren’t ordinary war trophies: all three weapons were plated in gold.

It’s not hard to imagine how the soldier got his hands on Saddam regime memorabilia. The 3rd Infantry Division, based at Fort Stewart, was one of the first American units into Baghdad and secured many of Hussein’s presidential palaces. In some instances, U.S. forces engaged in looting: a traditional pastime of war that has recently fallen into disfavor.

The guns, it turned out, were not unusual. Eight years later, Libyan rebels combing the ruins of Muammar Gaddafi’s palaces discovered a number of gold weapons, including a gold-plated Browning Hi-Power pistol and Dragunov sniper rifle.

Just across the U.S.-Mexico border, Mexican drug cartel leaders have been blinging out their guns with gold. Oh, and did we mention that Hitler too had golden guns? Even fake dictators like golden guns.

Elaborately decorated weapons have always been a part of human cultures, from the very first handheld weapons crafted by man.

Decorations originally took the form of engraving directly into the weapon, in materials such as bone, wood or metal. Later techniques were developed to inlay precious or semi-precious items such as coral, precious stones, silver or gold into swords or early muskets and hand guns.

The process of gold-plating guns is not at all difficult, and could be done by anyone with easily purchased tools. There are even YouTube videos that describe the process. The gun is first broken down and thoroughly cleaned. Second, a coat of copper is applied by special brush to the parts as a base. Finally, the gold plate is brushed on and the part is dipped in water. Now, put the gun back together and that’s it, you’re done.

But gold-plated guns are not useful. The shininess of the gold makes the user stand out and easy to spot. The really curious question is whether or not all gold-plated guns can actually be fired, as the plating slightly increases the dimensions of the coated parts.

A drug lord might try to fire a gold-plated Colt .45 pistol only to discover the parts are stuck in place. It’s telling that whenever Saddam Hussein blasted away in public during state parades he used regular guns and not his gold-plated toys.

Is there a common reason why evil leaders like golden guns, a unified field theory for why men with twisted moral principles like coating their weapons in 24 karat gold?

Adolf Hitler, Muammar Gaddafi and Saddam Hussein were evil, violent men who had seized power and held onto it with violent means. They would have likely identified with — and even enjoyed — Mao’s statement that “Political power grows out of the barrel of a gun.” Guns were undeniably a part of their rule, and they owed their grasp and retention of power to guns and the terror they inflicted.

All three men also saw themselves as revolutionaries: Hitler attempted his infamous Beer Hall Putsch, Hussein was chairman of Iraq’s Revolutionary Command Council, and Gaddafi was the more flamboyantly-titled Brotherly Leader and Guide of the Revolution of Libya. Revolutionary leaders (and even drug dealers) traditionally see themselves as “men of the people” and so it’s not surprising they carry relatively ordinary weapons.

Rather than a fancy engraved shotgun typical of Germany’s upper crust, Hitler’s golden Walther PPK pistol started life as an ordinary German police-issue handgun. So did Gaddafi and Hussein’s AK-47s, which armed the secret police forces and armies of both regimes.

How do you make a ruler’s Polizeipistole Kriminalmodell hand gun or drug lord’s Avtomat Kalashnikova assault rifle stand out from the rank and file? The answer seems to be: dip it in gold and bling it out until it hurts your eyes.

Another, simpler explanation is that it’s just a matter of bad taste. When you live in a bubble away from people who won’t critically judge your ideas and opinions for fear of being sent to prison or tortured, those ideas and opinions can become skewed.

In that bubble, ruling a state whose foundation is built on violence, surrounded by yes men, power and money, perhaps gold-plated guns start to look pretty appealing. If it’s your idea, nobody is going to tell you they aren’t.

And yet, not all dictators and bad men embrace gilded weapons. Stalin never had golden guns, and neither did Kim Jong Il of North Korea or Idi Amin of Uganda. Neither men had much taste, but in different ways: as Kim Jong Il’s simple clothing or Idi Amin’s extravagant military dress uniform will attest to, their spectrum of ostentatious costumery went from drab to fab.

Kim had a reputation for plain dress, hiding his opulence from the public, and maybe Idi Amin just didn’t think of it. Curiously, both men died peacefully. Syria’s Bashar Al Assad, like his father Hafez Al Assad, seems too bookish and banal to have a hidden stash of golden guns … unless someone like Gaddafi gave him one, in which case it is probably in a closet somewhere.

So maybe there is no unifying theory of why bad men love gold guns. Men who are unbalanced enough to incorporate killing into climbing the dictatorial ladder are by definition unlike the rest of us. It’s hard enough to understand someone’s motivations for murder, could we hope to understand why they like deadly, tacky things?

The world will almost certainly see more golden guns uncovered in the future. This period of instability in the Middle East could indeed shake out even more golden guns, from the likes of the House of Saud for example. One thing we know for certain: those who live by the golden gun, often die by the gun. If Assad does find something in his closet, he may want to think about regifting.