What Does the Interwar Period Tell Us About the Ukraine Crisis? 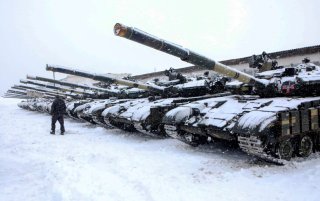 Too many people have been desperately trying to figure out Vladimir Putin’s next move in Ukraine. Some have even myopically compared the militaries of Russia and Ukraine, failing to recognize and comprehend the enormity of the global geopolitical shift underway. It is as if we are hurtling through the skies on an airplane at 700 miles per hour without even realizing it. It’s difficult to understand the speed and direction while on the plane; it’s easier to comprehend from the ground.

Similarly, the interwar period (1918-39) is a useful vantage point from which to view the Ukrainian crisis. There are considerable similarities between that period of the twentieth century and what is transpiring in Eastern Europe today.

A decade after the end of World War I, Western capitalism had a major heart attack caused by the Great Depression of 1929. The United States, having been hit the hardest by the collapse, turned inward and adopted an isolationist foreign policy. The devastating economic crisis and fresh memories a ruinous war in Europe debilitated trans-Atlantic governments, making any foreign military involvement exceedingly unpopular among their people. When Japan invaded Manchuria in 1931, President Herbert Hoover even refused to impose economic sanctions for fear of Japan’s ire. Any American president of that time would have probably followed Hoover’s path as the country’s economy collapsed. The last thing the people of America wanted was a foreign entanglement. The now-defunct Philadelphia Record newspaper said, “the American people don’t give a hoot in a rain barrel who controls North China (Manchuria).” Depression-plagued America and the ineptitude of the League of Nations allowed Japan to pursue its expansionism with impunity.

Receding Anglo-American global influence also opened up space for Adolf Hitler. The Germans had been defeated in World War I and humiliated by the Treaty of Versailles that forced Germany to give up territory to Belgium, Czechoslovakia, Poland, and return Alsace and Lorraine to France. Hitler pledged that he would restore Germany’s social and economic pride by uniting the scattered German population near abroad and attain ‘Der Lebensraum’ (territory believed to be necessary for national existence). With Japan’s impunity in Manchuria fresh on his mind, Hitler initiated his expansionism with small steps. He started with northern Czechoslovakia (also known as the Sudetenland, a predominantly German-speaking region). At the Munich Conference of 1938, Britain, France, and Italy agreed that the Sudetenland could be annexed by Germany. Emboldened by the Anglo-American aloofness, Hitler aimed higher. Why not take Poland? To appease Polish fears of a German invasion, the British prime minister Neville Chamberlain gave formal assurances to the Poles that “in the event of any action which clearly threatened Polish independence, and which the Polish Government accordingly considered it vital to resist with their national forces, His Majesty’s Government would feel itself bound at once to lend the Polish Government all support in their power.” As expected, neither the British nor the French moved a finger as the German blitzkrieg swallowed Poland in less than three weeks. British historian Roger Moorhouse calls the inaction “a hideous betrayal.” After all, who would want to get bogged down in a war with Germany over Poland?!

If Poland can be annexed, why not the rest of Europe? As the German inferno raged throughout the continent, Winston Churchill implored Franklin Roosevelt to intervene in vain. Even in early 1941, when much of Europe had come under German invasion, Roosevelt refused to help Britain, citing the reluctance of the US public opinion.

Hitler, now at the peak of his power, lamented the British encirclement of Germany in June 1941 when he announced Operation Barbarossa to the German people. Hitler called the Russian military deployment on Germany’s eastern front “menacing.” He argued that “Greece’s ties to England threatened to rapidly transform this area (the Balkans) into a general battleground.” These were the pretexts Hitler used to invade Russia and the Balkans.

Fast forward 1990s. Just like the disgruntled Hitler in the 1930s, Vladimir Putin came to power resenting what had become of the glorious Soviet Empire and promising to restore Russian “glory” and attain the Russian version of Lebensraum. Just like Hitler wanted to unite the German peoples that were left out of the motherland after the Treaty of Versailles, Putin seeks to take his people that were “tragically” left out in the former Soviet Republics under the wings of Mother Russia. Just like the Great Depression of 1929 gave Hitler a window of opportunity, the 2008 Financial Crisis that has to this day left-liberal democracies incapacitated bestowed Putin an unprecedented prospect. It is no coincidence that Putin began the invasion of Abkhazia and South Ossetia (autonomous republics in Georgia) in August 2008, days after oil soared past $140/barrel and the United States was being hammered by the financial crisis. South Ossetia and Abkhazia were Putin’s Sudetenland. If Georgia could be attacked, then why not Ukraine? In 2014, Putin invaded eastern Ukraine and annexed the Crimean Peninsula, citing the wellbeing of his Russian brethren in these regions. And just like the “hideous betrayal“ of Poland by France and Britain in 1938, Ukraine was betrayed by the Anglo-American duo who pledged to protect Ukraine’s territorial integrity in return for renouncing its nuclear arsenal in the Budapest Memorandum of 1994.

Putin’s decision to invade Georgia and Ukraine came as both countries were intending to join NATO. Just like Hitler’s resentment of German encirclement by the British, Putin repeatedly warned of the Russian encirclement by NATO. Just like Hitler’s singling out Greece as a British launchpad, Putin’s spokesperson Dmitry Peskov warned of the American military buildup in Alexandroupolis, Greece. Just like Hitler didn’t stop in Poland and moved on to the rest of Europe, Putin has indicated that he may not stop in Ukraine. For the first time, he openly issued an ultimatum that NATO must leave Bulgaria and Romania, former Soviet satellites. The Baltic states, where a considerable Russian population live, have also raised alarms that they might be next. Those states’ NATO membership may not leave room for comfort. At the height of the Cuban Missile Crisis, Washington withdrew the defensive missile shield from Turkey, a NATO member, exposing the country to Russian aggression. American interests have always trumped those of NATO members.

If the 2008 crisis was a heart attack for capitalism, the COVID-19 pandemic has been a major stroke for liberal democracies. Increasing unemployment, skyrocketing inflation, coupled with social unrest have all but crippled the United States and the European Union’s ability to form a united front. Germany’s refusal to comply with the American request to shut down the Nord Stream 2 gas pipeline from Russia, resisting sanctions against Russia, and its refusal to allow overflight for British aircraft carrying arms to Ukraine have prompted the question “Is Germany a Reliable American Ally?” France’s Emmanuel Macron also disregards Washington and seeks a its own path amid the crisis. Even Washington is not eager to deter Russia. Biden seems to have already agreed to a “minor Russian invasion of Ukraine.“ Biden’s sloppy withdrawal from Afghanistan exposed his unwillingness to initiate further military adventurism given the lack of American public support. The 2022 midterm elections may also play into his decisionmaking.

Meanwhile, Russia faces an existential demographic crisis. Its population is aging and declining. Putin needs more Russians and they are in Ukraine, the Baltic States, and Kazakhstan (The installation of a pro-Moscow government in Kazakhstan in January 2022 is worth noting).  Given the rapid decline of the West, he has a door wide open for him to move ahead with his plans.

Today’s Ukraine is the Poland of 1939, expendable for the interest of major powers. With its dilapidating economy, failing military, and growing social/political instability, the United States cannot afford to intervene militarily. Germany, the economic locomotive of the European Union, needs Russian gas to survive the impacts of COVID-19. France needs Russia in Africa to counter increasing British resurgence. It is a matter of when, not if, Russia rolls into Ukraine and moves one step closer to re-establishing the Russian Lebensraum, making Biden, Macron, and Scholz into today’s Chamberlain. Another Pearl Harbor is unlikely given nuclear deterrence but we shouldn’t expect a WWII-type of American comeback as China holds the American economy hostage. Finally, let’s not be surprised if we see a headline in a Philadelphia newspaper saying, “the American people don’t give a hoot in a rain barrel who controls Taiwan.”

Ali Demirdas, Ph.D. in political science from the University of South Carolina, Fulbright scholar, professor of international affairs at the College of Charleston (2011-2018). You can follow him on Twitter @DrDemirdasEn.